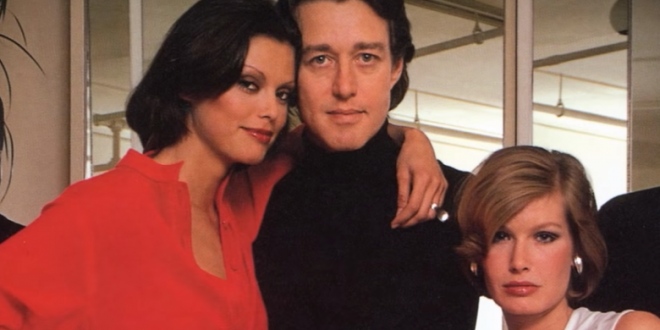 A boy from Des Moines, Iowa, lauded by New York’s Bergdorf Goodman; the “H” exponentially “branded” everything from couture, perfume to uniforms for Braniff Airlines and the Girl Scouts of America; his halcyon days numbered by his hedonistic nights at Studio 54; drugs, alcohol, release of sexual inhibitions (Halston’s proclivities are subtly alluded to, he died of AIDS); his stratospheric ambition led to his designing deal with J. C. Penney in 1983; elitism erased, Bergdorf’s cauterization of all his creations; shunned by high end stores; he was far ahead of designers creating lines for the masses; Esmark, acquired Halston Limited in 1983 and sounded the death knoll for the mighty, delusional Halston, no longer king, just a titular head, slipping toward serfdom.

“Halston” revives his image, a celestial star, its brilliance, like a supernova, destined for obliteration; its afterglow resonates with remarkability, ingenuity, tinged with wistful, enigmatic style and redolent nostalgia.