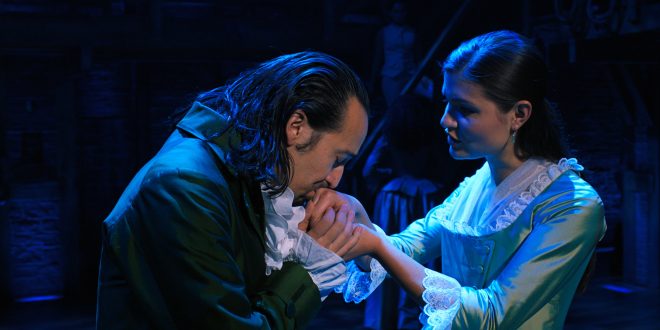 This, my third foray, into the legendary arena of the American Revolution (1775-1783), starring Alexander Hamilton (1755-1804) was scintillatingly positive; first exposure was the play in New York City, at an obnoxious ticket price (my fault, no one held a pistol to my head) that actually had a negative effect on my entertainment scale; fortunately, I was one of the few who experienced “Hamilton: The Exhibition” an extensive, intense 3-D tour de force; filling in historical gaps absent from the musical; an ambitious thirteen million dollar, fiasco, that I thought, one of the finest, informative, stellar exhibitions I had ever seen.

Disney +, with the original Broadway cast is marvelously available to all who own a television or computer; “Hamilton”, brought into the 21st century by Lin-Manuel Miranda (Hamilton) an historical visionary, with a pastiche of hip-hop, R&B, jazz and an intimacy, denied one in the theatre; a cast of brilliantly blended races, unquestionably accepted: African Americans depicting Aaron Burr, George Washington, Marquis de Lafayette; King George, insipidly pale; the Schuyler Sisters, Hamilton’s feminine mystique, of mixed pedigree, hint at women’s liberation; Eliza, (1757-1854) Hamilton’s wife, after his death, lived a life of philanthropy, establishing the New York Orphan Asylum Society.

More than the spectacle: Britain’s imperialism, battles of Lexington and Concord, founding of the First Continental Congress, “Hamilton” is a study of engulfing ambition, self- aggrandizement, political gerrymandering, and above all, the overpowering disease of envy. The “green gene”, at the core of Burr’s and Hamilton’s disintegrating friendship, foolishly culminating in a life shortened, unrealized potential; here’s a masterpiece that engulfs, inundates and challenges one’s sensitivities with each viewing.

2020-07-12
Peneflix Admin
Share !
Previous: THE TRUTH (FRENCH/ENGLISH) ON DEMAND
Next: RUMINATIONS FROM THE BUNKER