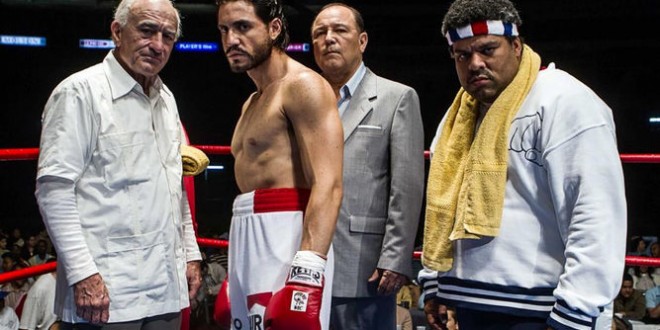 Directed and written by Jonathan Jakubowicz “Hands of Stone” is not destined to reign in the halls of the best boxing films of all time (“Raging Bull”, “Cinderella Man” “The Fighter”, “Requiem for a Heavyweight” “The Hurricane”, “Rocky” mania) but it is vastly entertaining, well-acted and infused with terrific fight scenes. Edgar Ramirez is galvanizing as the scrappy, brilliant boxer Roberto Duran (1951); honed his skills on the streets of Panama City, as gifted as he is in the ring, his immaturity and illiteracy cripple him in his personal life.

Positively riveting is Ana de Armas (“War Dogs”) as Duran’s wife and mother of his five children, Felicidad; genuinely, beautifully handled, is his wooing of the school girl from the “right side of the tracks”. Also, a poignant touch, De Niro’s daughter Drena De Niro plays his estranged daughter in the film.

“Hands of Stone’s” major flaw is the depiction of Sugar Ray Leonard (Usher Raymond) as a smug, insipid “turn the other cheek” kind of guy; their rivalry was keen, vulgar and catastrophic; the ring scenes would have sufficed.

At its core is Duran’s relationship with his fellow Panamanians (his generosity is legendary); from idolatry to scorn they informed his decisions; transforming the man with hands of stone to one with a heart of gold.