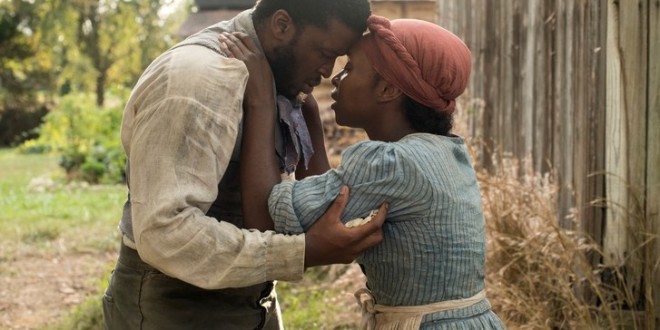 A paragon of fortitude, courage, selflessness; Harriet Tubman (1820?-1913) depicted with monumental, staggering, dignity by actor Cynthia Ervio; Tubman, whose visage is worthy of any currency, stamp, postcard; canonization should be hers. Director Kasi Lemmons, without empiricism, gifts Harriet Tubman the lionization she earned, won, by standing against and treading upon evil: “people were not meant to own other people.” Having read Colson Whitehead’s “The Underground Railroad” (fed slaves from south to north from the late 18th century, until the Civil War, 1861), protagonist “Cora” was a metaphorical facsimile for Harriet; 1849, Maryland, Araminta (Minty) Ross Tubman, married to John Tubman, a freed man, runs, and after many near-death confrontations (owner Gideon Brodess, depicted with eerie, slimy nobility by Joe Alwyn, in perpetual pursuit) she reaches Philadelphia, where mentors William Still (Leslie Odom Jr.) and Marie Buchanon (Janelle Monae) indoctrinate her into an unrestricted lifestyle.

Tubman’s obdurate will and overpowering homesickness spur her return to Maryland to rescue her family; as a child she suffered a head injury, resulting in “fits”, cloaked in spiritualism, guided by a righteous power, a path unveils itself; the major success of the film rests in the believability and victorious outcome of these “visions.”

A mighty myth swirls at the core of Harriet’s legacy: 19 missions, never losing one of her 300 slaves, where in all probability, much fewer; undisputed, was her sobriquet “Moses”, bringing her people into a slave-less society. As a spy for the Union Army, she accompanied them on their raid of Combahee Ferry, successfully rescuing over 700 slaves; a life, dedicated to others, she perished in poverty of pneumonia, March 10, 1913.

“Harriet”, does not sanitize slavery but also does not bludgeon viewers with its egregiousness; its cancerous foulness screams with the scarring worn by its victims; a portrait, just as profound today as it was in its creation; “Harriet” glows with humanitarian lessons; lessons, that sear, and should be practiced universally.