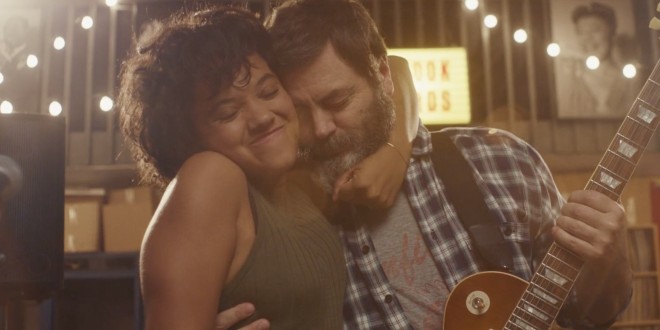 Emanating from the screen is a slice of poignant perfection, a rarity in the age of “Marvel Mania”; “Hearts Beat Loud” with tenderness and grace encompasses a father/daughter relationship; Nick Offerman and Kiersey Clemons as “Frank and Sam Fisher” glowingly, beautifully depict a unit built on trust, respect and a genuine pride in each other. Nick, a musician, whose light has dimmed, is closing his record shop; the last “purveyor of processed vinyl”, felled by digitalization; Sam, bright, a would-be medical student, is off to college at summer’s end, she is also blessed with a voice that can “rock the ages”; she and Nick formed “This Is Not a Band”, the trophy of their daily jam sessions.

From its commencement “Hearts Beat Loud” spoke to my core, watered my eyes, thickened my throat, palpated my heart; there are those capable of loving without selfishness, but with penetrating, genuine, deep-seated, heartfelt humanity. I loved this movie!