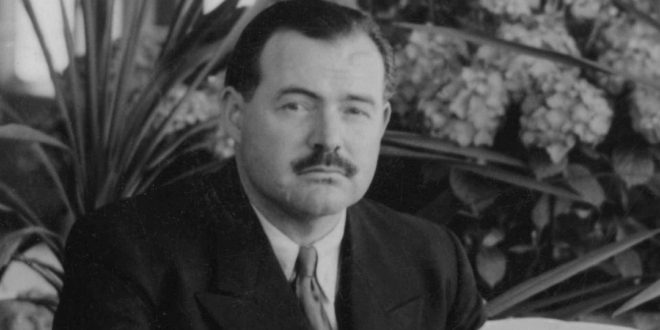 Ernest Hemmingway (1899-1961) was a man, a writer who has informed all who seek edification, beauty, comfort, solace in the written word; binging on his every published manuscript, shedding rivers of tears, shattered by the poignancy of brutality, destructiveness of emotional stability; his soul splayed upon the page, without bias, pretense, he sought from an unfathomable depth the meaning of wrenching pain, heartlessness of war, loss, unrequited love; his profound sense of living, loving reverberates in his every sentence. The purity of his empathy for the wounded both physically, psychologically, is intimidating and frightening; nary a smidge of the superfluous blasphemes his tales; “Code Heroes” are birthed by circumstances: Jake Barnes, Nick Adams, Santiago: brave, laconic, courageous, embracing the wounds of the heart and the battlefield.

Ken Burns, and the voices of Peter Coyote (narrator) and Jeff Daniels (Hemingway), with immaculate precision dissect the man, the myth, the avatar. Burns, without blinders, leaves no wart unexposed; his flaws, even flirting with extremism, could not cauterize his gift, his determination, his discipline to pay homage to his craft; write he did, and the women in his life  (4 wives) either exacerbated but primarily mitigated his predilection; his ego craved undivided devotion, bordering on sycophancy from the women he loved: “When you love you wish to do things for. You wish to sacrifice for. You wish to serve”; his expectations were perpetually dashed.

Hemingway soared, mingled with the stars and left a literary legacy, that to this day, has the potency to change lives.