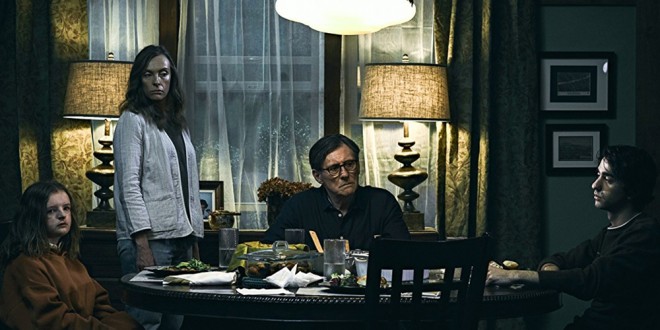 “Who knows what evil, lurks in the hearts of men? The shadow knows.”

It took a week of intense contemplation before I decided to visit “Hereditary”, director/writer Ari Aster’s highly controversial film, saturated in demonology, horrifying mysticism and creepy spiritual forces, up to no good. This is not a movie for the faint of heart, mind and those seeking a light escape from the day’s tsuris. But it is a film imbued with profoundly compelling performances, excellent filmmaking, direction, and gluttonous references to Greek mythology, legendary ousting of the nefarious angels from heaven’s sanctuary and man’s ultimate fate, whether chosen or fated, which is the more tragic? “Iphigenia”, sacrificed by her father “King Agamemnon” for smooth sailing to the Trojan Wars, holds a clue to the film’s progression.

Toni Collette gives a marvelous, captivating performance as “Annie Fisher” an artist specializing in miniature houses; her mother has just passed and she is leery of her emotional laxity. Gabriel Byrne’s empathetic but appropriately clueless depiction as Annie’s husband “Steve”, as the “outsider”, whose “heritage” is meaningless to the scenario.  Alex Wolff is mesmerizing as “Peter Fisher” Annie’s oldest child, stoned, minimally haunted, his strained, contentious relationship with his mother holds the mystery of this tormented family. Milly Shapiro, appropriately cast as “Charlie Fisher” the younger of the two Fisher children, draws unflattering portraits of family and contemporaries; she is off-putting, allergic and the catalyst for bleak revelations.

Ann Dowd, in a pulsating performance, as séance specialist, “Joan”; beneath a veneer of kindness hovers supernatural prowess and keys to the ultimate illumination.

Last year Darren Aronofsky’s “Mother” set the film world ablaze with its focus on God/Earth; “Hereditary” excavates the hellish realm of one of its major kings, “Paimon”; frightening, paralyzing, both films will continue to resonate long after viewing.  The choice is yours, you were forewarned.