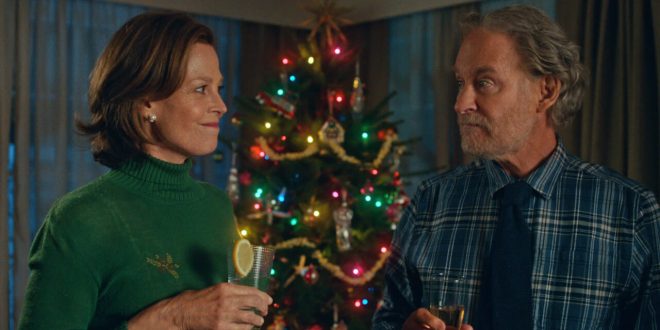 In “The Good House” Sigourney Weaver and Kevin Kline prove they are still at the pinnacle of their acting acuity and save the film from benign mediocrity.  Weaver depicts a successful real estate agent (Hildy “Good”), divorced from her gay husband, “Scott” (pungently depicted by David Rasche), mother of two daughters and an alcoholic, in denial. Kline, an ex-beau,” Frank” hovering attentively on the sidelines (regretfully, limited screen time, charming nonetheless), untrusting her alcoholic whims. Ineffective rehab leads to the swilling of merlot; inebriation morphs into a blackened abyss, an inconceivable cavern to ascend.

Lacking the potency of “Days of Wine and Roses” but co-directors Maya Forbes and Wallace Wolodarsky plus an authoritative Sigourney Weaver earn genuine accolades for a film that shuns platitudinous twaddle and embraces the vicissitudes of alcoholism.

Peneflix has neglected the Bollywood genre of late; there have been to few worthy of the mental might to address, examples “Ek Villain Returns”, “Brahmastra: Part One”; but “Vikram Vedha” secures watchability primarily because of the performances by major Bollywood icons: Hrithik Roshan and Saif Ali Khan; perfectly paired, their warring scenes are spellbinding (no one takes abuse like the action stars in Hindi films); mimicking  “Michael” in “Halloween” they never die, ceaselessly rising from dying, to tussle another day. Edge- of- your seat storytelling keeps viewers bewitched throughout, a must-see film for aficionados of eminent cinematography, spectacular, inordinate skirmishes and pneumatic, brawny musclemen.