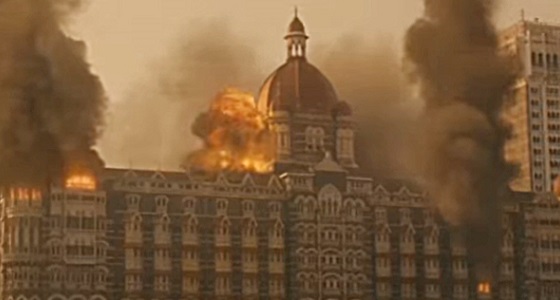 I do not believe in a God of Carnage; but 10 Pakistani men over November 26-29, 2008, assassinated 164 people in the name of Allah, squelching India’s way of life, as they did in the United States, September 11, 2001; director Anthony Maras, without blinders or sensationalism, reenacts and personalizes the calamitous hours of terror endured by guests and staff of The Taj Mahal Palace; such archival splendor bloodied by a warped, damned philosophy; a sacrilegious feat, without hope of redemption, by any supreme being or higher power.

“Hotel Mumbai” flawlessly cast, capitalizes on the calamity and the inimitable, unselfish bravery of the patrons and the staff: Dev Patel (his heart and intelligence inform his every role), “Arjun”, a practicing Sikh, working the night shift in hospitality; Anapum Kher (seasoned to perfection in both Bollywood/Hollywood arenas) is “Chef Hermant”, whose equanimity thwarted the terrorists; Armie Hammer and Nazanin Boniadi are a deliriously enchanted couple, “David” and “Zahar” housed in one of the Taj’s palatial suites with their baby and nanny “Sally” (Tilda Cobham-Hervey); particularly crusty is Jason Isaac’s depiction of a Russian businessman, “Vasili”. There was not a false or illegitimate moment with any portrayal; even the mendicants proved worthy “stars” of their villainy.

Cinematographer Nick Remy Matthews powerfully succeeds in his reminiscences of those infamous days and hours. The Taj rose again, like the Towers, it’s what democracies do; why they are envied and throngs strive to emigrate to their shores.

Anyone who has ever roamed the hallowed halls of the Taj, inhaled the scent of the Rajput, bejeweled Maharajas, titled heads of state, aromatic redolence of power, wealth and fame, helplessly beguiled; percolating pulse of the Mahabharata, Ramayana, Puranas, hovers on its walls, vitrines, ceilings; The Taj is a beautiful, throbbing, monumental testament that India is, and will be for eternity, the “cradle of civilization.”