Latest Reviews
Home » Hollywood » I AM NOT YOUR NEGRO 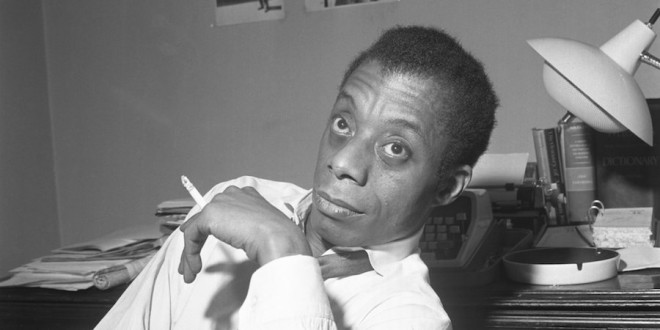 A photographer of author James Baldwin smoking a cigarette.

I AM NOT YOUR NEGRO

African-American artist Kerry James Marshall,  born in Birmingham, Alabama, 1955, the year that Rosa Parks, seated in the colored section of the bus, refused to relinquish her seat to a white person; Marshall’s meteoric career has focused on the black aesthetic; from the mundane to the iconic, his blazing skill, pictorially represents the black experience in America; a number of his works lionize Martin Luther King, Jr. (1929-68), an especially poignant painting, “Momentum” features all those slain because of their outspoken belief that “freedom is never given voluntarily by the oppressor; it must be demanded by the oppressed” (M.L.K., Jr.); included in the painting are Medgar Evers (1925-63) and Malcolm X (1925-65).

“I Am Not Your Negro” directed by Raoul Peck is a brilliant biopic of author/philosopher James Baldwin (1924-87); more than a captivating, educational polemic on race in America, it strips to the spine the difference between the light and dark populace, it resonates with the profound distrust, animosity that imbued the political horrors of the 50’s and 60’s; it is a shocking awakening, demanding comparisons between then and now. Baldwin’s inimitable prose of “Remember This House” captures in minimal pages his respect, understanding and love for his friends: Martin Luther King, Jr, Malcolm X, Medgar Evers; men slaughtered for trying to break the historical perceptions ingrained in the “white man’s” blind ignorance of the “black man’s” world. The voice of Samuel L. Jackson, reading Baldwin’s lyrical prose adds intensity, richness, mirroring Baldwin’s keen wisdom and comprehension.

Interspersed with archival footage of raging riots, gleaming commercials of glowing pale girls, John Wayne Westerns; Baldwin’s eloquent, pointed criticisms on the Dick Cavett show, lectures, stun with his prescience, courage and astute understanding of how the “Negro” is categorized, maligned, overlooked in America.  The benign, so accepted in the cultural landscape of the 50s’ and 60’s, seen through black eyes is an affront, embarrassment in retrospect.

“I Am Not Your Negro” should be seen by everyone, it should be required viewing in the educational system; here is enlightenment, amazingly accessible, screaming sensationally with Baldwin’s sweeping awareness: “Not everything that is faced can be changed; but nothing can be changed until it is faced.”  I was moved and changed by this beautiful biopic.