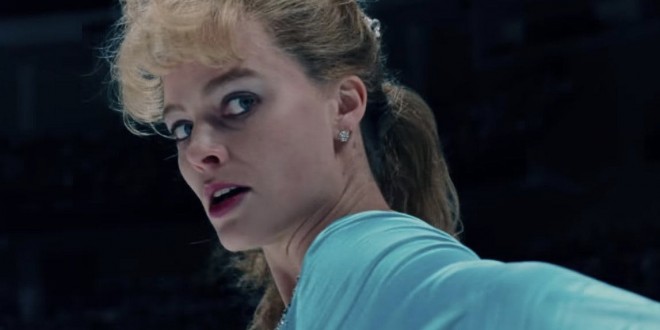 Tonya Harding from her birthdate, November 12th, 1970, never stood a chance at normalcy; fathered by her mother’s (LoVona) fifth husband, absconds early in her life, exists in poverty outside Portland, Oregon; a skating prodigy, but perpetually abused verbally, physically, emotionally by a harridan from hell, LoVona Harding. Allison Janney gives a dazzling depiction of a disgruntled, humbug who feels that only Tonya’s talent can save her from well-earned obscurity. Margot Robbie as adult Tonya, actualizes her potential as an actor’s actor; capturing Tonya’s gritty, foul-mouthed, fiery temperament, simultaneously her insecurities, longing for love and approbation. Without an education or a foundation in human kindness she foolishly responds to the attentions of Jeff Gillooly (strong study of a limited lummox by Sebastian Stan) and his friend Shawn (idiocy on steroids, sensational Paul Walter Hauser) and her future is sealed, a victim of poor choices and fate.

Director Craig Gillespie nurtures pivotal characterizations from every actor, especially Robbie, Stan and Janney but the competitive skating scenes secure the “silver”; Robbie, a natural skater, with digitalization cements Harding’s every landing and facial expression, stuns as she nails the iconic “triple axel”; this feat anchors her position as one of the world’s magnificent champions.

Apart from the “incident” that led to her ultimate humiliation (the 1994 kneecapping of fellow skater, Nancy Kerrigan (Caitlin Carver), at a pre-Olympic game practice in Detroit), Gillespie flays the prejudice of the jurors who found Harding’s roots unsavory, anathema, unreflective of the ideal American heroine, waif-like, beautiful, a princess on ice. Tonya’s intrepid tenacity, spawned by the bullying she suffered at the whim of an amoral mother, is reason for plaudits, not ostracism.

The protagonists flashbacks, their mundane excuses, lack of introspection, recriminations lend a sad credulity to a tragic story; limited individuals, incapable of seeing or comprehending the bigger picture, doomed by a warped sense of self-aggrandizement, in the end, left to wallow in regrets.

Tonya Harding, at forty-seven, has found a level of happiness in marriage and motherhood; guilt by association has been expunged, penance paid, a future, hopefully paved, with integrity.

2017-12-23
Peneflix Admin
Share !
Previous: CALL ME BY YOUR NAME
Next: THE GREATEST SHOWMAN