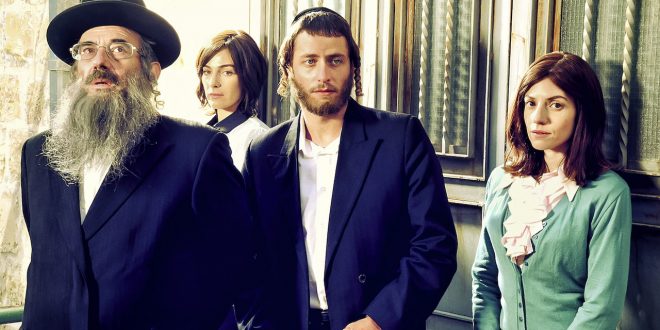 Possibly living so close to the edge, their series and films soar in depicting a world the masses could not envision. At this Dystopian hiatus, here are a few enthralling, captivating slices, experienced by a nation that dauntlessly refuses to die:

Watch back to back:

Two versions of orthodoxy: “Shitisel” extreme Haredi Jews living in Geula, Jerusalem; Shira Haas (“Unorthodoxy”), a teenage bride, invests integrity in her strict adherence to the Torah; no matter your beliefs, this addictive series will entertain and infuriate, simultaneously. “Shugin”, a more moderate approach to Orthodoxy, is vastly accessible, in its depiction of young adults, adapting and functioning in a contemporary milieu; looking for love “in all the wrong places.”

FIVE STARS EARNED BY BOTH!!!!!

Falls into the category of one of greatest series ever made. Three Israeli prisoners, held captive  in Lebanon for 17 years, are released; two return, one has perished.  What follows is the most hypnotic, mesmerizing flashbacks of their missing years and their adaptation to a world they no longer can relate to. Staggeringly brilliant writing and performances have made this series iconic. More than….

Has cemented audiences in Israel and in Arab countries: testament to Israel’s lack of pejority in carving into the frailties, misconceptions, flaws of both sides of the Israeli/Palestinian conflict; there’s enough malfeasance, titillating terror, forbidden romance to satisfy the most discriminating critic. Breathtaking tension guarantees, no nodding off.

Surprisingly well-acted by Sacha Baron Cohen, depicting the true tale of Eli Cohen, an Israeli  Mossad spy who shrewdly infiltrated the Syrian government in the 1960’s; taut, rigidly constructed and directed, “The Spy” is a thriller, made more engrossing by Cohen’s outstanding performance.

An absolutely charming, hilarious scenario revolving around two criminals, surviving a restaurant bombing in Jerusalem, who see the “light” and commence fulfilling the wishes of those prayers left at the Wailing Wall. A necessary antidote to today’s antitoxins.

A film that has everything: enchantment, romance, poignancy, culinary delights: from Berlin to Jerusalem, a love story that exponentially, surprisingly, touches heart, soul and palate.