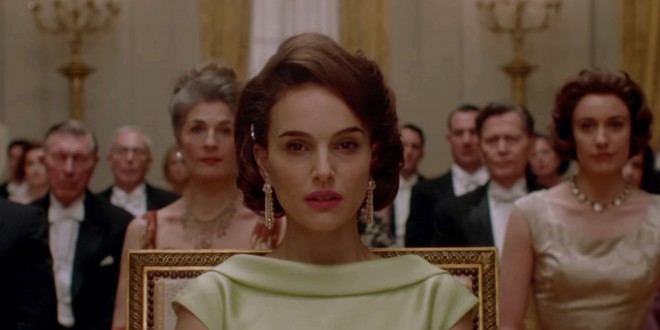 Natalie Portman is eerily exhilarating as former first lady Jackie Kennedy (1929-1994) in the aftermath of the horrific, surreal days after President John F. Kennedy’s (1917) assassination in 1963; director Pablo Larrain’s intense, compelling biopic will profoundly resonate with those who remember this nadir in American history and prove immensely educational for those who did not experience first hand, the death of Camelot.

Constructed to perfection, commencing with an interview by a tenacious journalist (superb Billy Crudup) a week after J.F.K.’s death;  anchorless, bereft, chain smoking, Jackie delivers inimitably, in a series of flashbacks, the devastating, traumatic effects of insurmountable, unimaginable pain; she is thirty-four years old, widowed, homeless, with two small children, her every moment splayed across the media, privacy is anathema. Greatness lies in the humane, troubled, catatonic depiction of Jackie’s emotional state; the stalwart shoulder and advise of Bobby Kennedy (stiff portrayal by Peter Sarsgaard) and Nancy Tuckerman (empathetic, but bland Greta Gerwig) her friend and assistant; questioning her faith, she seeks the counsel of a priest (sublime John Hurt), questing a path to understanding, rationality; avoiding platitudinous drivel, his prescient words shed light, not answers, on her bleak circumstances.

Portman is Jackie Kennedy; from the breathy cadence of the elite, entitled class to a widowed icon, her performance is celestial, especially in silence, her expressions are palpable evidence of the chaos, rage, loss seething within; particularly poignant and vastly human, one evening, before her untimely expulsion from the White House, she smokes, drinks and revisits the heights of glory, in their cauterized reign, by trying on gowns reminiscent of their finest hours.

“Jackie’s” daunting sound track by Mica Levi and Richard Burton’s singing “Camelot” add lyrical loveliness to a time that will never be duplicated; beauty, brilliance, elegance, America’s royalty dashed to eternity in a single moment on a dazzling day in Dallas, Texas.