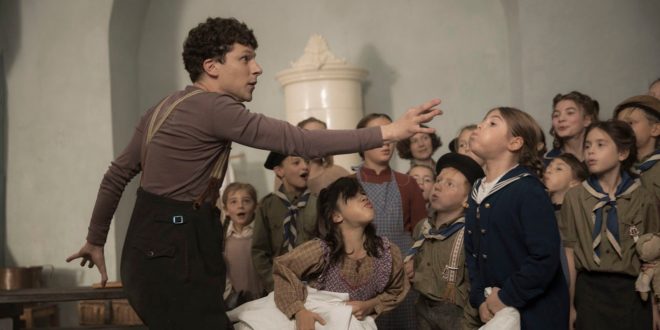 Vivarium: an enclosure adapted or prepared for keeping animals under seminatural conditions for observation or study; from its inception we recognize that “Gemma” (Imogen Poots) and “Tom” (Eisenberg) are stepping into a parable concocted by writer/director Lorcan Finnegan, in which they are the observed specimens; infused with bludgeoning metaphors: “Yonder”, suburbia of cloned homes, an address, number “9”, inescapability, release only after “the child is raised”; creepy premise, eerily echoing today’s quarantined milieu; Gemma and Tom imprisoned, forced to raise an alien child to adulthood; the child, a boy, ages exponentially, within weeks to maturity, while Gemma and Tom’s dehumanization process completes its cycle. Poots, Eisenberg and actors Senan Jenkins (Boy 1) and Eanna Hardwick (Boy 2) give their best to a comprehensible allegory; its ugliness provides an ephemeral  attraction/repulsion; its aftermath, a residue of distressing, uncomfortable, discombobulated ennui.

Jesse Eisenberg tackles the role of defining the embryonic days of mime, Marcel Marceau (1923-2007); a Jew born in Strasbourg, France, joined the Resistance,  credited with saving hundreds of Jewish children during WWII; he is excellent, especially as a “master of silence”. The film is sensational, periodically plodding, one-dimensional, but soars in the children’s scenes; horrifies, in depicting Nazi Klaus Barbie’s, (1913-1991) “Butcher of Lyon”, (Matthias Schweighofer, stratospherically, ideally evil) loathsome, abominable means of torture; actor Clemence Poesy (“The Tunnel”, “Final Portrait”) captures the otherworldly pain of one of his doomed victims; Bella Ramsey is poignantly enthralling as “Elsbeth”, orphaned after the murder of her parents, rescued by Marcel and his compatriots.

Director Jonathan Jakubowicz’s “Resistance” is exceedingly ambitious in scope, but astounds as a portrait of a gentle man who adapts to harrowing, monstrous circumstances and becomes a hero.