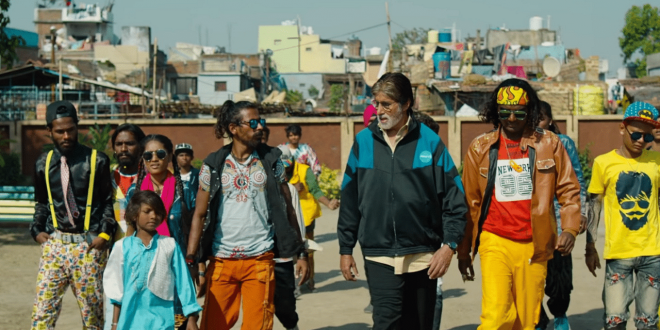 Years ago, a friend and I had the privilege of touring the Dharavi slum in Mumbai; staggering in its viability, actuality in its focus on poverty at its nadir, but also depicted the ingenuity of its in habitants; it was a hotbed of industry, vibrating with entrepreneurship: bakeries, cleaners, schools, with uniformed children; these inspirational exceptions eased, but did not erase the destitute, unforgiving lifestyle of its inhabitants. Director Nagrai Manjule in tandem with Bollywood great Amitabh Bachchan have created the finest portrait of India’s Dalits, outcasts, untouchables and their doomed future; Bachchan is quietly profound, cataclysmic, as a soon-to-be retired sport coach, Vijay Barse; empathizing with slum delinquents and their athletic dexterity, recognizing their trainability in football, (“Slum Soccer”) one of India’ most popular sports; the film soars with first time performers, collected from the slums; being neophytes added to their verve, drive and dedication to their roles especially in describing their damaged beginnings. “Jhund” also touches upon the “rag pickers”, those (including millions of children) who wade in the discarded detritus of the populace, separating cloth, cardboard, metal, glass; a huge revelation of emergence from this degenerative world is the film “The Hundred-Foot Journey” featuring Om Puri, who rose from a rag-picker to an actor; a tale worth lionization.

Bachchan’s depiction is a compilation of every role he has tackled and triumphed: “Zangeer”, “Sholay”, “Dewaar”, “Don”, “Silsila”, “Paa”, “Piku”, a myriad more but “Jhund” will resonate as a feat challenging to surpass, but look forward to watching him try.

2022-03-06
Peneflix Admin
Share !
Previous: AFTER YANG (IN THEATRES) AND SOON TO BE STREAMING
Next: MINI MUSINGS ON SCREEN & STREAM