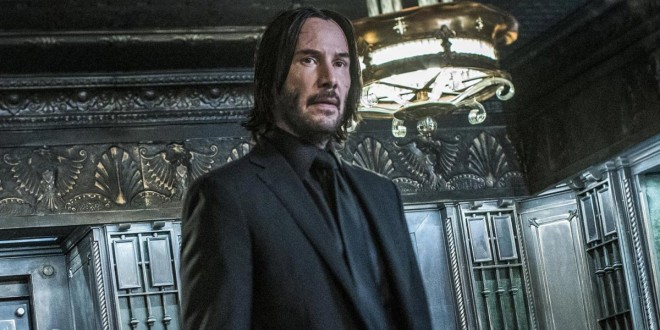 It wasn’t a petit mal seizure that propelled me to venture into this “war zone” of peppered parabellum (semi automatic machine gun) it was the realization on Monday morning that, of the countless films I visit, rarely have I reviewed or seen more than three of the top ten weekend draws; this week, nada; agonizing over the finality of Game of Thrones, rescued from doldrums by “John Wick” (Keanu Reeves’ has franchised, branded this character) a contemporary gladiator, capable of single-handedly, (reminiscent of “Drogon” lone surviving dragon), slaying throngs; clothed to kill in suit and tie, never eating, sleeping; communicating monosyllabically, in two hours, came close to besting the fatality count of eight seasons of “Thrones.”

If you are capable of compartmentalizing the mayhem and massacres there is a stylized rhythm, beauty to the filmmaking; director Chad Stahelski (“The Matrix”), in dual capacity as a stuntman, pristinely choreographs Wick’s aerobic, balletic, sword-wielding, gun-blazing mastery; on motorcycles, through glass vitrines, allies of Casablanca, streets of New York immaculately, flawlessly executed. The power of the film lies in a wounded Wick, rising Phoenix-like, from the pandemonium, to fight another barbaric battalion.

Embarrassingly, I admit to being fully acquainted with Wick’s prior escapades in justified assassination; the inhumane murder of his dog “Daisy”, animates the core of every Wick chapter; astoundingly as I watched a mesmerizing slaughter scene with Wick, “Sofia” (taut Halle Berry) and two killer dogs, I eerily sensed a presence, staring soundlessly, waiting for my acknowledgement, a speckled canine; initially, hallucination seemed plausible, but when the pertinent pup decided to take up residency on my lap, I yelped for its owner; proving the unexpected can prance, stun, blindside when least expected; his timing was scripted.