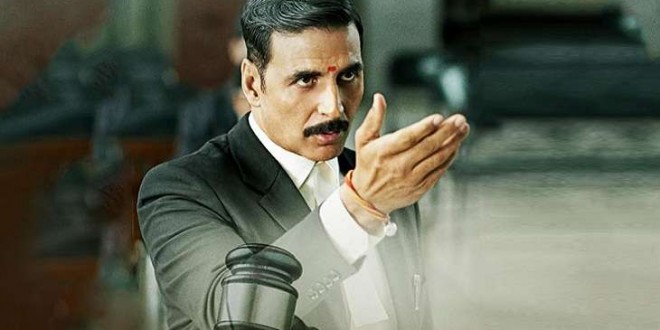 With the passage of time Bollywood’s versatile actor Akshay Kumar has grown in stature, as a remarkably gifted force in the genre; his serious roles surpass, in my estimation, the comedic sojourns, “Airlift” and “Rustom” are superlative studies of a man challenged, besting superhuman obstacles.

Director Subhash Kapoor in “Jolly LLB 2 ” allows Kumar (Jolly) to spread his proficient wings, embracing a vast range of the emotional spectrum, as a lawyer trying to amend for an egregious wrong, committed to enhance his practice; struggling against fraudulent police officers, a tainted, elected hierarchy; trying to save the reputation of a man murdered because of mistaken identity.  Pervasive themes in Indian movies are political, judicial corruption; as in Western films, businessmen are perpetually portrayed as slightly or excessively untoward. The riveting courtroom drama surpasses expectations as deceptions, falsifications are unveiled.

It does not fall into the echelon of “A Few Good Men”, “12 Angry Men” or “Presumed Innocent” but its uniqueness categorically deserves a “room of its own”. The success of these scenes lies not only with Kumar’s passionate haranguing  of the miscreant, but the prodigious acuity of Saurabh Shulka as the “Justice”; initially we groan with his chubby buffoonery as he dances into the courtroom but realize that beneath the artificial disguise lurks a man of eminent intelligence; he is a fortress, refusing to be bullied, patronized by the opposing sides. The film pulsates with his magnetic performance.

“Jolly LLB 2” has enough of the “Bollywoodesque” required by Eastern audiences but is steeped in plentiful pathos, twists and surprising tweaks to satisfy universal movie-goers; enticing Kumar devotees to lobby for “Jolly LLB 3”.