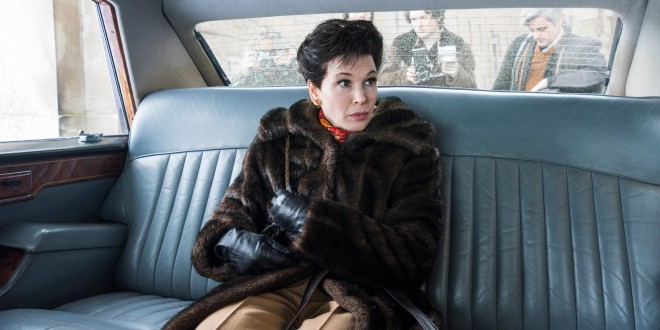 Renee Zellweger excavates the core of the vulnerable, superlatively gifted, but tremendously tragic Judy Garland (b.1922); her last stand, in London, 1969, where, like Custer, she flounders and fails. With flashbacks of her highway to stardom, viewers visit the embryonic source of her ultimate addictions; a creepy, controlling Louis B. Mayer (Richard Cordery) gives off pungent vibes of psychological (possibly, physical) molestation; pills to conquer hunger, sleep, insecurities;  director Rupert Goold’s portrait is pathetically realistic and at times excruciating to watch; still capable, she slowly self destructs, while her fans and fifth husband, Mickey Deans (too boyish, Finn Wittrock) bear witness to her implosion. Her handler in London, Rosalyn Wilder, depicted with subtle grandeur by Jessie Buckley (“Wild Rose”) faced with Judy’s massive mercuriality and booze-infused tantrums ultimately understands her tortured ward.

“Judy’s” vigor lies in Zellweger’s performance; more than mimicry it resonates and bleeds with the heartbreak of a mother incapable of caring, but desperately loving and needing her children; adrift in a miasma of drugs and alcohol, destroying instead of repairing her spirit, she succumbs, never recognizing that lying within her reach was the power to save herself; blindness, lack of introspection forecast her departure.

The film commences with a lecture from Louis Mayer to ingénue Judy, emphasizing her extraordinary voice, that sets her apart from her peers; did she want to be like them, marry their high school sweethearts? Have children, live a life of anonymity? It gives one pause, did she make the right decision?