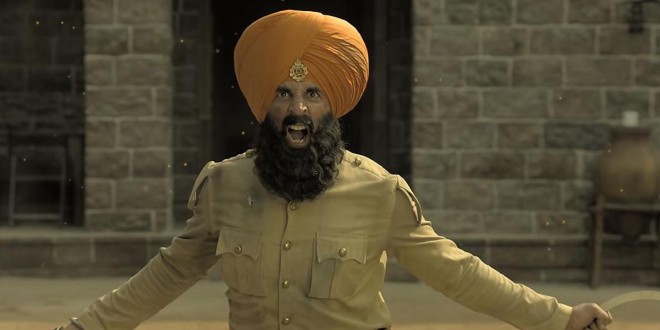 Bollywood strokes its historical conflicts with iconic reverence, immense spectacle, lionization of its heroes, spectacular cinematography plus gifts adulation and exaggerated license, especially in India’s march towards doffing the shackles of British domination (“Gandhi”, “Mangal Pandey”,”Padmaavat”); “Kesari” vibrantly speaks to the “Battle of Saragarhi” between Sikh soldiers of the British Indian Army and Afghan Pashtun tribesmen; the film concentrates on the seven-hour battle between 21 Sikh soldiers and 10,000 combatants on September 21st, 1897; aerobically gory, sensationally,  stylistically staged,  audiences are invested in the lives and demise of the 21 soldiers.

Beneath the facial foliage, Akshay Kumar as Havildar Ishar Singh, astonishes as the turbaned, righteous leader of this meager corps; early in the film he rescues a woman from being beheaded, because of her refusal to stay with her husband; his moral compass supersedes any authority, his conscience is informed by a supreme being;  no hierarchy prospers between himself and any individual; Kumar’s staggering interpretation imbues Herculean integrity to Singh’s legacy.

Director Anurag Singh’s portrait of the British as flaccid, one-dimensional, superciliously cruel is legitimate; imaginative stretch that their reign proffered for almost 200 years; the Rebellion of 1857 was a prophetic forewarning of eventual independence; Havildar Singh was told to forsake the Fort and scamper with his 21 men to safety; refusing the order lies in their determination to forge the path to sovereignty.

At times maudlin manipulation, syrupy sentences, platitudinous escapades distract from the scenario but not enough to skip this epically entertaining film.