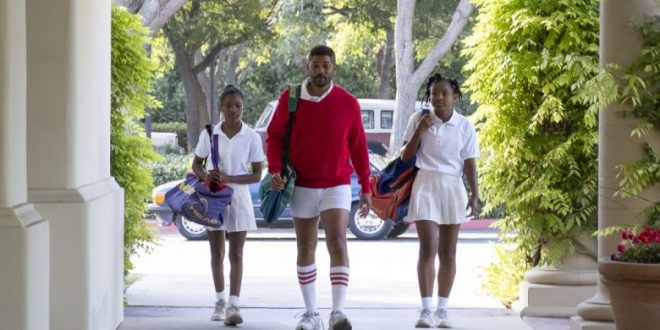 Appropriately titled, Will Smith, stars as Richard Williams, father of Venus and Serena Williams, two of the greatest tennis players, athletes, of all time; his word is law, he is sovereign in his household. The film was graced with the winning trophy at this year’s Chicago International Film Festival and audiences’ glow and cheer with acceptance and admiration. “King Richard” is a substantive, educational, moral movie; well beyond the genius of these super girls, and their electricity on the courts, lies an inner code of strength, goodness, and inimitable respect, fostered, inbred by their father; his godlike plan for their future (living in Compton, Ca. a hotbed of violence and crime) commenced at birth; keeping them safe and focused was the key to his mission. The remark-ability of his choice of tennis, stuns the majority; he saw beyond the elitism, a white man’s and woman’s sport, the glorified country clubs, trainers, camps, hefty fees demanded of the privileged; his commandments were obeyed: his girls did not follow the path of the majority; they studied, went to church, learned languages, visited theme parks, and indulged in the gifts of childhood, like Disneyland; they had “fun”.

Williams was maligned, criticized for his willfulness, cantankerous behavior, outspokenness but nevertheless prevailed; his dreams exponentially were realized, prophecies swelled a hundred fold, his daughters are icons and he was the “king”maker that ignited and nurtured their ascendency.

2021-11-21
Peneflix Admin
Share !
Previous: YEAR OF BENEDICT CUMBERBATCH: THE MAURITANIAN (Netflix); THE ELECTRICAL LIFE OF LOUIS WAIN (Netflix); THE POWER OF THE DOG (in theatres)
Next: HOUSE OF GUCCI (IN THEATRES)