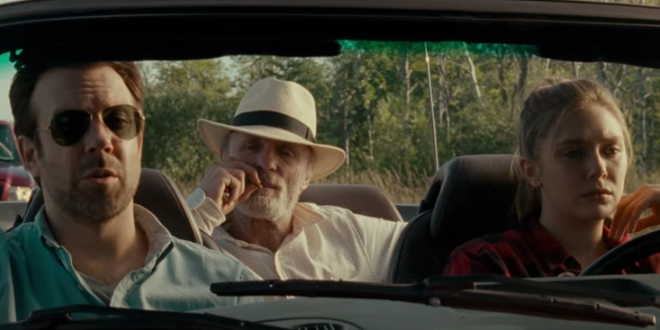 From its commencement in the 5th century B.C. with the camera obscura,  followed by the collaboration of Joseph Niepce and Louis Daguerre, with the Daguerreotype to the invention of Kodachrome (1955-2010) by Eastman Kodak, man’s fascination with codifying the moment, freezing forever, a portrait of what was, has been ubiquitous through time.

“Kodachrome” is a study in nostalgia, a whimsical longing to rejuvenate, wean from life support, an art that is being replaced, encroached, obliterated by modern tools, digitalization; the hand of the artist, cauterized by technological wizardry.

Director Mark Raso’s “Kodachrome” (based on A.G. Sulzberger’s 2010 NYT’s article) is a beautiful, sensitive homage to a process deemed obsolete; Ed Harris is dazzling as “Benjamin Ryder”, an iconic photojournalist, dying in tandem with his trade; persuading his estranged son, “Matt” (Jason Sudeikis, overwhelmingly wonderful) to accompany him, along with his nurse “Zooey” (Elizabeth Olsen) to Parsons, Kansas, the last bastion of film development, sounding the death knoll for Kodachrome. Ben has four rolls, slumbering for years in his archives, that must be processed before development expires.

Caustically, crisp writing by Jonathan Topper informs Ben’s cruel, iconoclastic treatment of his loved ones; hiding beneath his scurrilous tongue is his guilt, rage at his inadequacies as a parent and husband; Harris’ interpretation is staggering in its depth. Matt, a fledging music executive, is an exquisite, innately kind man; wounded by his absent father (“you never saw me”) his scars, instead of damaging him, allow him to perceive and accept the blemishes in others.

There are no surprises or unsuspected twists in “Kodachrome”; it transcends the bonding of father/son movies and wistfully recalls what no longer thrives, from the sublime to the benign: vanished loved ones, the Polaroid camera to Planters Cheez Balls and Scooter Pies; a metaphor for memories of bygone pleasures, treasures. Ben claims that photography makes human nature tangible; there are rumors, hopefully actualized, that Kodachrome is being resuscitated; allowing some to experience the pulverizing power Ben felt holding his Kodak camera.