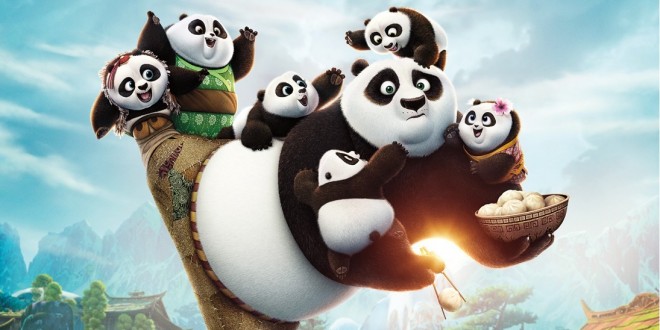 Animation, even as a child, failed to titillate my imagination, and it is with trepidation that I venture into the genre, unless compelled by the hype, critics raves or piqued curiosity; in this case the “hat trick” ignited my plunge into the  American-Chinese, computer –animated adventure of “Po”, a likeable, naive panda, partially skilled in martial arts.

Another irritant is knowing the “star” whose voice is featured in the anthropomorphic characters.  2013’s “Her” an unseen “operating system” was the totally familiar voice of Scarlett Johansson, the intended illusion, shattered. “Kung Fu Panda 3” (my introduction to the trilogy) fared better because, with the exception of Jack Black as “Po”, I did not immediately recognize the other “voices”.

The benign, predictable plot is transcended by glorious filmmaking; spirits soar with the adventures of Po and his friends and “fathers”; swirling, kaleidoscopic, fantastical terrain: magical, majestic, glossy mountains, enclaves of the just; alternate universes, haunts of the iniquitous, especially “Po’s” diabolical nemesis, “Kai”, who with the power to steal a warrior’s “chi” (essence), is a pernicious force to flee. J.K. Simmons’s “voice” infused “Kai” with menace, fear and intrepidness.

“Kung Fu Panda 3” shines with life’s messages: only through tests do we discover ourselves, failure eventually breeds knowledge; vicissitudes, when mastered, add maturity and wisdom; acceptance of oneself and others amplifies life with grace and harmony.

Yes, in conclusion, I grew quite fond of these fussy, rotund creatures, their buddies and stunning showmanship. Directors Jennifer Yuh Nelson and Alessandro Carloni more than accomplished their four-year journey into the remarkable, innovative, animated world of their own inventiveness.