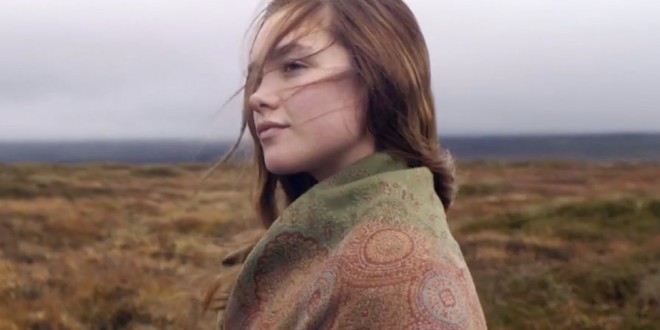 Russian writer Nikolai Leskov’s (1831-1895) 1865 novella, “Lady Macbeth of the Mtsensk District” has inspired an opera by Dimitri Shostakovich (1906-1975), a ballet by Rudolf Brucci (1917-2002); Polish filmmaker, Andrzej Wajda’s (1926-2016) 1962 “Siberian Lady Macbeth” brilliantly wallows in the restricted world of a nineteenth century woman, shunning conventions of the time, making her own rules, inevitably leading to her demise.

British director William Oldroyd’s masterful interpretation of Leskov’s tale takes place in northern England, a landscape forbidding and embracing simultaneously; “Catherine” (mesmerizing, compelling performance by Florence Pugh) has been sold along with a piece of property to father/son landowners (sordid and sensational depictions by Christopher Fairbank and Paul Hilton); treated as chattel, unloved, untouched  she lustily engages in a sexual relationship with a stable-hand, “Sebastian” (grimily good Cosmo Jarvis); passion leads to obsession, murder and a conclusion varying from the novella and Wajda’s film, but imminently satisfying.

Catherine’s metamorphosis from naivety to calculated cunning is the determining force behind the scenario; Sebastian’s bravado undulates below the belt; his spinelessness foils and dooms their future; she is daunting and terrifying as she pursues her goal.

Oldroyd’s and Pugh’s direction and inimitable acting lend credence and viability to a nineteenth femme fatale who refused the moral shackles of the age.