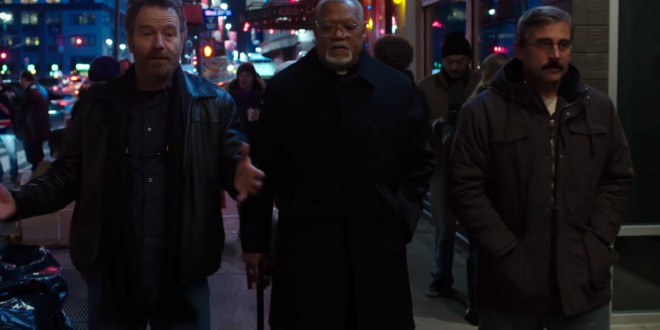 Director/writer Richard Linklater’s “Last Flag Flying” is one of the finest “road trip” films ever to grace the screen, slipping stunningly into the realm of: “Rain Man”, “Thelma and Louise”, “Little Miss Sunshine”,”Motorcycle Diaries”, “Nebraska”; stratospheric performances by Steve Carell, Bryan Cranston and Lawrence Fishburne, three Vietnam veterans, after a thirty year hiatus, travel to Arlington cemetery to bury “Larry’s” (Carell) son who was killed in Afghanistan. The year is 2003.

Life has altered the men who met and bonded during the Vietnam War; Larry (beautiful, empathic depiction by Carell) finds “Sal” (Cranston’s performance is galvanizing), a bar owner (consumes most of the profits), and recruits him in his mission to solicit “Muller” (Fishburne is stellar as a Reverend who has shunned his halcyon phase for the role of God’s messenger); hence the trinity commence the pilgrimage to “Larry, Jr.’s” military send-off.

“Last Flag Flying” will leave you gasping for breath as hilarity infuses the creative, scintillating scenario; the men slowly reveal their intricacies, pleasure and pain, defeats and triumphs; Sal, with inimitable levity, wisdom and gifted mimicry, reminisces about their travails as soldiers, in what the Vietnamese refer to as “The American War”.

Wonderment settles comfortably as the journey is derailed, marvelously interrupted as the men allow prejudices, misconceptions to dissolve;  respect, love and honesty fracture the façade of conventionality, they’ve been blanketed in; here is profound character development, genuinely realized.

“Last Flag Flying” delivers everything a movie should consist of: a sensational narrative, prescient directing, heart-warming, heart-wrenching performances, therapeutic laughter, joy in experiencing, being cocooned in the process. Rarely, can I state, unequivocally, that I love a film, “Last Flag Flying” deserves the veneration.