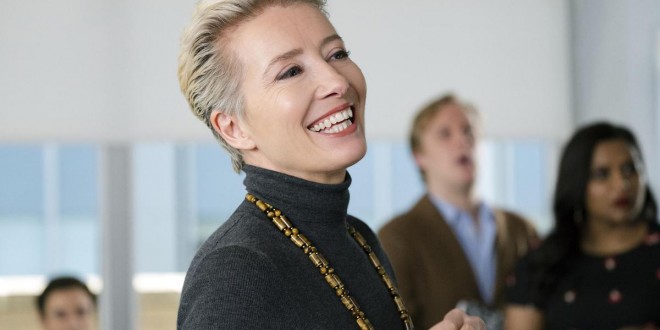 Emma Thompson is astronomic as “Late Night” host “Katherine Newberry”; twenty-seven years, almost as many awards, surviving in the bemouth, chauvinistic realm of male predominance; she is caustically brilliant, shreds with a sabre tongue and wit any unwanted, even if warranted, criticism; she is losing her edge, threatened with replacement, forced to hire a female writer. “Molly Patel” (Mindy Kaling, wrote and co-stars) an Indian girl, a chemical plant employee, has lionized Newberry, and dreams of writing for her; nightmarish reality when she has to maneuver a hostile, testosterone infused environment, predictably she “saves the night”.

There are flaws in “Late Night”, hardly worth mentioning, so I am declining the opportunity. The writing, casting, costuming (bests “The Devil Wears Prada”, Katherine, shows no bias in designer selection) is smart, droll, hilarious and gracefully strokes political correctness without viewers succumbing to anaphylactic shock; sublime chemistry is pivotal to the success of the film, Thompson and Kaling have cornered the market. Thompson at sixty is at her prime: beautiful, poised, she not only conquers the role of Katherine, she imbues it with eminence; Kaling wrote “Late Night” with Thompson in mind, she is to be applauded on her prescience; at thirty-nine, her journey is in rapid assent.

“Late Night’s” entertainment value lies in the intuitive intelligence, consummate charm, pristine professionalism of all involved in the project!