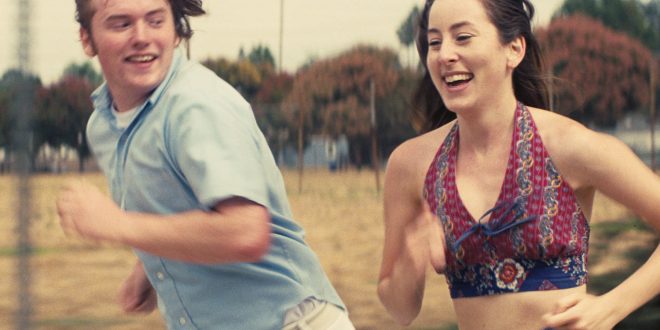 Miraculously on the 365th day of the year my faith in filmmakers was restored; an entire movie where the word “like” was not bastardized; young, prescient actors speaking line after line without using the egregious verbal “like”, “you know”, “uh” to express themselves; a lost art revived; yes, taking place in 1973, before oral crutches came to life but refreshing, nonetheless. Director Paul Thomas Anderson’s partially true tale of Gary Goetzman’s (Tom Hanks business partner) march through adolescence is depicted with savoir faire by Cooper Hoffman (Seymour Hoffman’s son); not particularly attractive but “Gary” possesses the natural charm of a flimflam man, he is a born actor and entrepreneur at fifteen; seeing twenty-five-year old  “Alana Kane”, with incessantly long legs (translucent ingénue Alana Haim) and instantaneously Cupid sears his fate; thus commences one of the most joyful films of the year.

Gary and Alana plow, run through various business; his undaunting passion never recognizes roadblocks, obstacles; as a child actor he has always earned money; he is generations ahead of himself and Alana becomes addicted, despite their age difference, to the ride. Humor, subtle at times, but full blast to those who’ve experienced the 1973 universe: women bombarding male chauvinism, haywire politics, oil crisis, fabulously entertaining vignettes by Sean Penn, Bradley Cooper, John Michael Higgins keep the focus on a bygone, unprecedented era without minimizing it.

It was New Year’s Eve, leaving with a spirited heart, knowing 2022 was going to be a banner year.