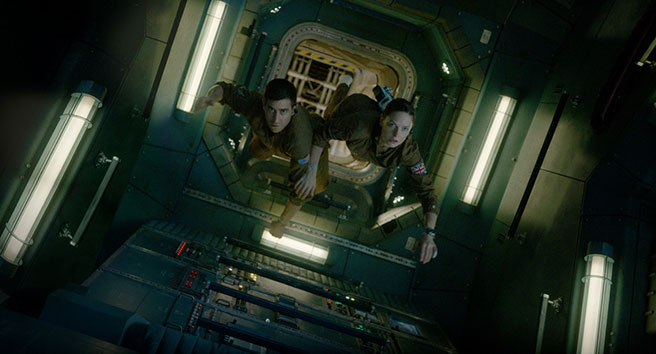 Sitting through this preposterous excuse for entertainment, a flagrant waste of talent, another example of what moviegoers want from the screen, I had to fathom “why” aliens, body snatchers, undulating blobs are in such demand, with the exception of “Arrival” these extraterrestrials threaten “life” and existence as we know it; possibly the reason for their popularity. The reality, bleakness of today’s society leaves little room for rejoicing; suicide bombers, warring nations, egregious leadership and fake news spread a blanket of gloom, a miasma of discontent, infecting our waking, breathing, cognizant days, hours, minutes; film provides an escape; and those like “Life” make the norm seem reasonable. It could never in light years succumb to this? Or could it?

Director Daniel Espinosa uses a complication of previous alternative “life” movies, with a predictable scenario; “Calvin”, whose cuteness dissipates with the intensity of his appetite, is made viable on the International Space Station; crewed by doctors, scientists from a diversity of nations; their histories are so superficially painted that the viewer is inhibited from investing or caring about their demise; they perish as the tentacles of an adult Calvin satisfies his craving for protein; the staff includes actors Jake Gyllenhaal, Ryan Reynolds, Rebecca Ferguson, Ariyon Bakare, Olga Dihovichnaya, Hiroyuki Sanada, socially correct  selection,  appealing to a global audience.

Special effects lend some palpability to what felt like a “lifetime” of tedium; not that it matters, but even the conclusion erases any element of hope .

2017-03-25
Peneflix Admin
Share !
Previous: BEAUTY AND THE BEAST
Next: THE ZOOKEEPER’S WIFE