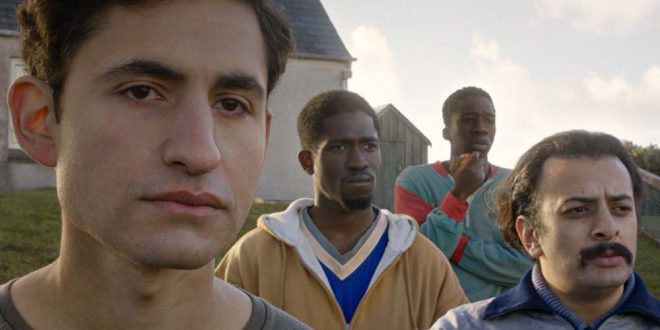 “Limbo” in Catholicism, is a bubble where souls of the unbaptized, hibernate until permission is granted to enter the celestial realm; in this scenario, it is a young Syrian refugee longing for permanent asylum on a sparsely populated Scottish island, where he, amongst other exiled, is waiting for the metaphorical gates to open. Director Ben Sharrock with irony and humor follows morose “Omar” (Amir El -Masry) through trials and blunders as a displaced “hero”; a musician of renown in Syria, a lonely outlier, carrying his oud (lute-type instrument) wherever he goes; it is his identity, an anchor affirming his viability; his past is revealed as he speaks to his mother on a weekly basis; his love and longing for family, estrangement from his brother, quest for recipes that informed his past, ooze with traumatic alienation, compassion; vastness and emptiness of the landscape reference the hopelessness, simmering in his soul. His roommate “Farhad” (whimsical Vikash Bhai) with Falstaffian adroitness, vanquishes Omar’s decent into despondency; stealing a rooster and naming him “Freddi, Jr.” (after his icon, Freddi Mercury), he’s a salve, saving the film from engineered histrionics.

Commencing with a couple demonstrating the rules of acceptable deportment on the dance floor, concluding with a lyrical homage, “Limbo” triumphs as a perfectly balanced portrait of a man more than worthy of endorsement, adoption, respect.