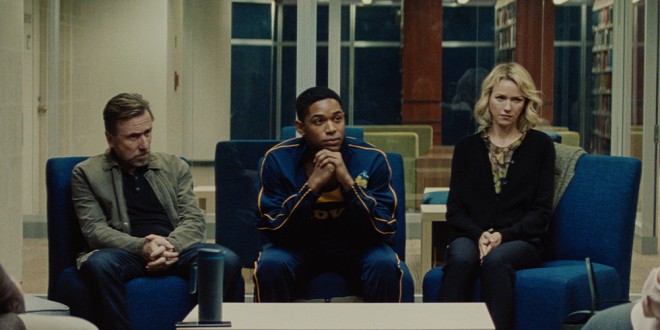 “The brighter the “light” the darker the shadow”. “Luce” (Kelvin Harrison Jr.) is dazzling, beyond charismatic, he is seventeen, an orator, athlete, class valedictorian; he is also a rescued victim of war-ravaged Eritrea, where at seven, he was a trained killer; his adoptive parents “Amy and Peter Edgar” (Naomi Watts and Tim Roth) have dedicated ten years to his rehabilitation which on the surface, appears to be remarkably successful. Fissures in Luce’s façade materialize immediately when his history teacher “Mrs. Wilson” (Octavia Spencer) questions an inciteful paper he wrote condoning violence as a means of self-expression and freedom; Luce, a master of manipulation, imbued with a sophistication outside the realm of normalcy, is perpetually in control. There is a pristine plasticity informing the Edgar family dynamics; they tiptoe around each other, rarely touching, embracing; contrived politeness, hiding broiling, incendiary emotions.

“Luce” directed by Nigerian-American Julius Onah, is problematic, saturated with unanswered questions, but fascinating nonetheless. Relentlessly charming, Luce beguiles, controls, and ignites Pavlovian responses from the women in his life: Amy, his mother, senses his flaws, blinded by her love, ignores the obvious; girlfriend, “Stephanie Kim” (Andrea Bang) a malleable puppet, faithfully adheres to his script; it is his relationship with his teacher Mrs. Wilson that dominates the core of the film; she is black, successful, an indominable force that he must conquer, destroy and in tandem earn her respect; she’s a paradigm of an African American attaining success in a white hierarchy;  Luce’s conflict resides in his “otherness” his predictable perfection fragmenting his psyche; broader issue of genealogy versus fostered geography; supremacy of ingrained background, challenging the gift of choice, in a breathtaking democracy.

“Luce” magnificently acted, is a terrifying scenario; a contemporary conundrum already delineated on the international arena; can the disenfranchised, the refugee, rise above the circumstances of his birth, accept his welcoming host and thrive?