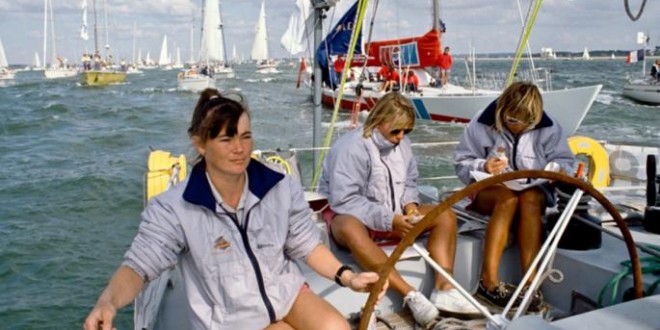 Yearly, we watch Oscar winners waving the 8.5 pound statuette, extolling the platitudinous “follow your dreams”, “actualize your potential”, “if I can do it, so can you”, aphorisms. “Maiden” directed by Alex Holmes tips the scales as an exhilarating, galvanizing documentary; its ingenuity, Draconian ambition, heart-arresting filmmaking, stuns with the story of Tracy Edwards, who realized her dream in 1989, when she and her all-female crew entered the Whitbread Round the World Race, (now called “The Ocean Race”); “Maiden” a second hand refurbished sailboat, financed by King Hussein of Jordan; its sailors, at best, treated cavalierly by a male-dominated sphere; scoffed, unimagined competitors, rejected for their lunacy; defying the odds, they made historical headways for women worldwide.

Succinctly blending archival footage (powerfully mesmerizing, is the partnership between the oceans and the interloping sailors), and present day interviews with the crew, especially Edwards, who at fifty-six, is a compilation of poise, grace and humility; these women, at times laugh in disbelief, at the temerity, mettle, indomitable steadfastness it took to exceed preconceived, provincial boundaries; rising above repellent chauvinism, blasting the “feminine mystique” they sailed as one, won as one.

“Maiden” poignantly speaks to the ocean’s supremacy, its chilling capacity to swallow all that tread on its watery landscape; Edwards and her crew never lost sight or respect for its preeminence; herein lies its epic mastery.