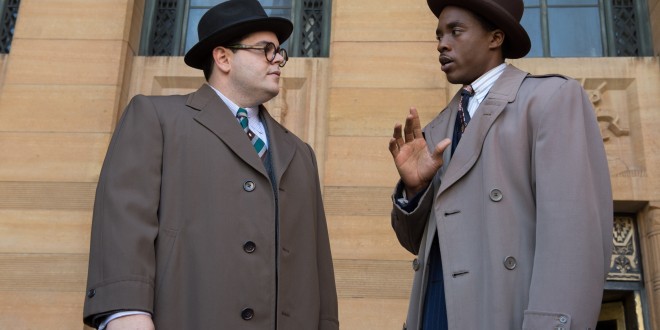 Thurgood Marshall (1908-1993) is the paradigm, an icon, encompassing the formative years of the civil rights movement; appointed to the Supreme Court by President Johnson in 1967 his influence has grown exponentially through the decades.

Chadwick Boseman nails to the core the young NAACP lawyer, traversing the country, defending innocent black men accused of a crime, based solely on their color.  It is 1941 and in Bridgeport, Connecticut, chauffer, Joseph Spell  (pivotal, profound performance by Sterling K. Brown) is being held for raping and attempting to murder his employer, socialite  Eleanor Strubing (mature depiction by Kate Hudson); Marshall, hires local insurance lawyer, Sam Friedman (superior, Josh Gad), a Jew, who has never tried a criminal case.  Boseman/Friedman is a perfect pairing; their differences dissolve, sharing issues of race and anti-Semitism, antagonism leads to understanding, mistrust to respect and friendship. Writers, father/son Michael and Jacob Koskoff infuse the script with wry wit and humor, eliminating an enervating fug, that could have been destructive to the narrative.

On a myriad of levels “Marshall” soars: a viable history lesson, should be required viewing in the educational system; potent in addressing the tumultuous times of the 40’s, the degradation suffered by many subjected to the “White’s Only” syndrome; pulsating, rabid anti-anti-Semitism, subtle but positive element of the film. The most pungent lesson is the acknowledgement that Thurgood Marshall was the initiator in the eventual pulverization of the perception of a black’s inferiority.

“In recognizing the humanity of our fellow beings, we pay ourselves the ultimate tribute.”; Thurgood’s words resonate as pertinently today, as yesterday.