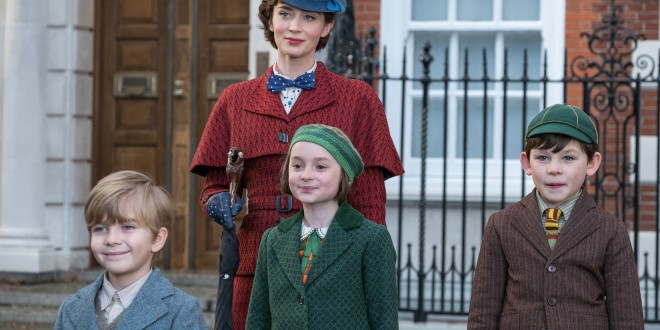 Emily Blunt is Mary Poppins, Joel Dawson is Georgie, Pixie Davies is Annabel and Nathanael Saleh is John in Disney’s MARY POPPINS RETURNS, a sequel to the 1964 MARY POPPINS, which takes audiences on an entirely new adventure with the practically perfect nanny and the Banks family.

There will be those enchanted, charmed, joyously entertained: neophytes, who have never seen or revisited  the 1964 version, or have forgotten the magical “Banks” family and their ethereally, spell-binding Nanny, “Mary Poppins”, (inimitable Academy Award winning performance by Julie Andrews), her logical effervescence, intuitive genius in captivating her wards; here was a Mary Poppins, sprinkled in fairy dust, unparalleled in heart, humor and mesmerizingly wonderful. There are characters that should remain unduplicated; Mary Poppins should never be cloned.

Director/producer Rob Marshall’s valiant stab at recreating an extraordinary icon, is lovely to look at, but is missing the fiery potency of the original; Emily Blunt, physically perfect, in form and voice, seems faux, plastic, more animated than real in her depiction of the shaman, savior of the misguided, financially illiterate Banks family, and their rootless children: Ben Whishaw is challenged as the befuddled “Michael Banks”; Emily Mortimer is saccharine-infused simplicity as “Jane Banks”; the highlight, a star fully-formed, is Joel Dawson, “Georgie”, the youngest of the clan; he is riveting, captures your attention and flawlessly cements it; Lin-Manuel Miranda, “Jack” the lamplighter, (1934, London) with grace and aplomb struts, sings, bikes and appears to have a rollicking, fantastical good time.

Possibly “Mary Poppins Returns” is a reminder of a past depressive era, that in contemporary vernacular, seems benign, stale, inconsequential. Maybe that is a good thing?