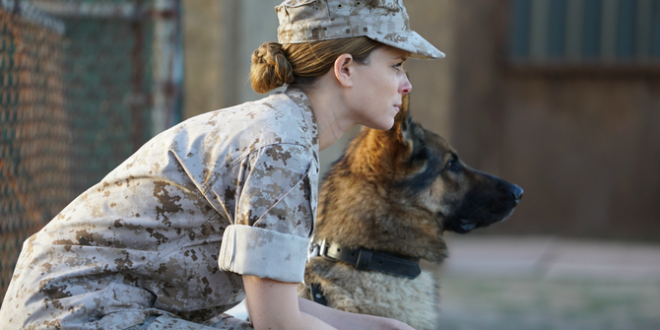 Directed by Gabriella Cowperthwaite (“Blackfish”) the unusual scenario focuses on Marine Corporal Megan Leavey and her K-9 bomb detecting canine, Sergeant Rex; their relationship fills a haunting void echoing in both.  Megan, at the nadir of her life, is aimless, depressed  (her best friend is dead), she enlists solely to avoid the bleakness, nothingness looming in her future. Kate Mara’s interpretative performance is poignantly spectacular.

The film soars as Megan, with trepidation, trains intractable Rex; many hurdles had to be conquered before trust was forged and their partnership, refined. Thrilling are the scenes in Iraq as Rex detects bomb after bomb, until an undetected explosion maims both Megan and Rex, intrepidly they continue the mission, earning a Purple Heart for Leavey.

After retiring, Megan mounts a massive campaign to adopt Rex after his “enlistment” is concluded; the film stumbles with her lassitude, mourning, when her request is denied. But climbs as she pursues the aid of the populace: petitions, television appearances, press.

Intimacy is  pungently powerful; this is a movie about healing, comforting, soothing both psyche and soul, profound love and friendship. Skirting politics but not shying away from war’s vicissitudes. “Megan Leavy’s” lessons reverberate long after its credits have dimmed; it is possible, a dog can truly be, man’s best friend.