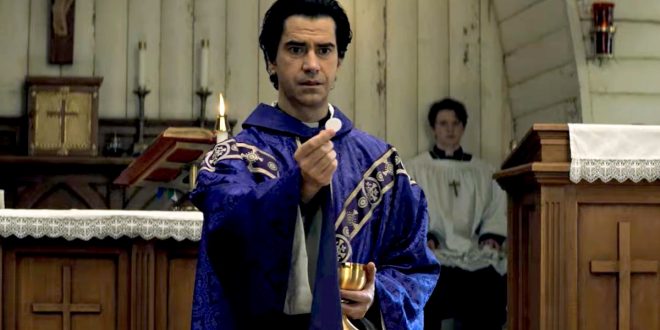 Moments of stunning brilliance shrouded in diabolical, draconian, sacrilegious horror; created and directed by Mike Flanagan (an altar boy in his youth); this series of seven episodes has enraptured or scandalized viewers; I find myself vacillating between the two. Familiarity with both the old and new testaments lends concrete legitimacy to Flanagan’s literal, visceral, visual interpretation of the texts; the first episode, “Genesis”: “in the beginning was the word”, we’re introduced to the protagonists living on an island, gasping for breath: “Riley Flynn” (profound performance by Zach Gilford) recently released from prison, after serving a four year term for the accidental drunk driving death of a young woman; “Father Paul” (mesmerizing, Hamish Linklater is staggeringly charismatic as God’s messenger); “Erin Green” Kate Siegel, is purity personified, as the pregnant, ex-girlfriend of Riley; “Beverly Keane” played with pious, poisonous creepiness by Samantha Sloyan; her every scene is imbued with slippery, uncouthness guile; Sheriff “Hassan” (Rahul Kohli) a Muslim and escapee from racism in New York and “Dr. Sarah Gunning” (Annabeth Gish) scientifically examines the unexplained phenomena materializing on the island; offsetting the haranguing evangelizing by the hierarchy of St. Patrick’s Church.

From Psalms, Proverbs, Lamentations, Gospel, Acts of the Apostles, concluding with Revelation, audiences are exposed to inflammatory, thuddingly penetrative, overwhelmingly astute treatises on life, death, redemption and what constitutes a gift from God; the most compelling and revealing narrative revolves around the oath of serenity: asking God for the wisdom to recognize what one can change: Father Paul and Riley Flynn’s competitive discourses boggle the mind and resonate with penetrating logic.  Riley and Erin have monologues about life after death, unveiling the intellectual prowess in Flanagan’s chronicle.

“Midnight Mass” stumbles, sinks into the dark, blood-sucking world of Dracula. A voracious angel quenches his thirst at the necks of the diminishing population. In conclusion, it has possessed, tormented my dreams, shunned, but skulking in the corners of my daytime consciousness; Mike Flanagan would be pleased.