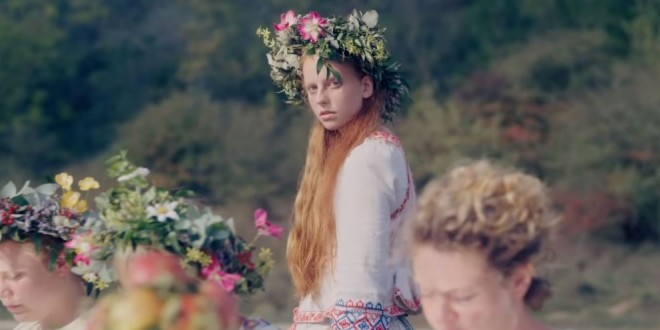 Beware of succumbing to the thought that director Ari Aster’s (“Hereditary”) “Midsommar” is in any way reminiscent of Shakespeare’s, “A Midsummer Night’s Dream”; a plot dredged from the macabre, desolate level of Aster’s imagination; four unsuspecting victims are lured to Sweden’s Midsummer Festival, (pre-Christian, pagan solstice celebrating life and love) by the insouciant “Pelle” (Vilhelm Blumgrer), a fellow graduate student; a more uninteresting group could not be culled; a tiny exception, “Dani” (Florence Pugh) whose parents had been murdered by her homicidal sister; her boyfriend, “Christian” (Jack Reynor) placidly caddish, is no match for her susceptibility to this fiendish cult. Bludgeoning metaphors saturate the incessantly long, hallucinogenic, sunny solstice: mercy killing, planned parenthood,  at a certain age, scripted suicide; a deflowering scene was unintentionally hilarious.

The “horror” genre is tricky, and to be successful, has to balance reality with the implausible; Wes Craven with ironic skill mastered it with his elm street “Nightmare’s”, Jordan Peele successfully pushes the boundaries with “Get Out” and “Us”; Darren Aronofsky, “Black Swan” and “Mother” with brilliant prescience, shattered dominant titillating factors, even Aster’s “Hereditary” went beyond the expected and was daunting, haunting throughout.

“Midsommar” is a frustrating, unsatisfying, pejorative slap at one of Sweden’s most celebrated holidays;  echoing “Puck’s”, “what fools these mortals be”, exiting, knowing,  I fell into this witless category.