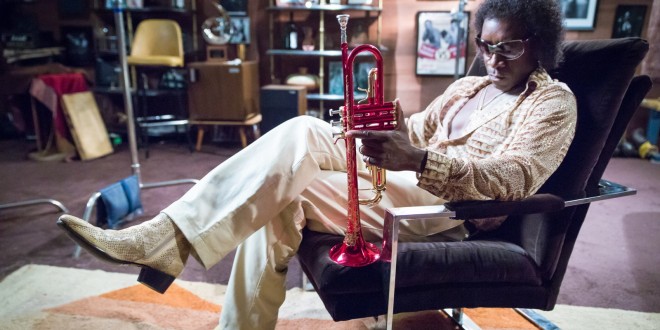 In a ten-day period there has been a blitzkrieg of biopics about singers/musicians born between the years 1923-1929; inspired geniuses, “Apollo” (Greek mythological god of music) shed his potency, enabling them to sparkle above the fray; more than their distinguishing gifts, it is the lure of illicit substances that infuses, defines their commonality: Hank Williams, (1923-1953), “I saw the Light”; Chet Baker, (1929-1988), “Born to be Blue”; Miles Davis, (1926-1991), “Miles Ahead”.

Don Cheadle is electrifying as the iconic jazz trumpeter; he also writes and directs “Miles Ahead”, showing no favoritism or softening of Davis’s demons, which have stymied him for five years at the film’s commencement, in 1979. Cheadle, with gargantuan transformative skills captures the skullduggery, abusive, impulsive, erratic behavior of a man whose drugged and addled brain has stumped, crippled his reason, but not his musical prowess.

Ewan McGregor, as would-be “Rolling Stone” writer, “Dave Brill”  is the catalyst, igniting the scenario’s progression; slimly defined, Dave’s presence fills a vacuum that might have been bettered served if he didn’t appear so befuddled, totally out of his league, or depth.

Emayatzy Corinealdi is dazzling as Miles’s dancing, sinuously sensational wife, “Frances Taylor”; the film beautifully, expertly interlaces the past with the present as we experience the exuberance and eventual nadir of their relationship.

“Miles Ahead”, despite its emphasis on the destructiveness of addiction, is fun, funny, magically musical; Cheadle’s wizardry in writing, directing and acting is a filmic milestone.

2016-04-08
Peneflix Admin
Share !
Previous: KRISHA
Next: BORN TO BE BLUE ON DEMAND AND IN THEATRES