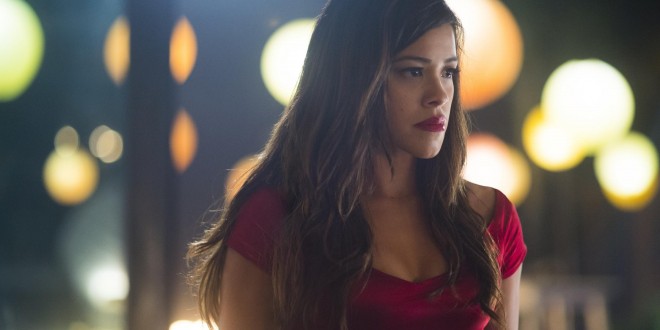 Gina Rodriguez is Gloria, a young woman drawn against her will into crime and violence by a skeezy drug kingpin, in Miss Bala.

With Cassandra prescience, harrowingly recognizing a precursor to a “Bala” franchise: “Ms.”, “Mrs.”, “Gramma Bala”; has to be terminated in the first trimester. Director Catherine Hardwicke and actors Gina Rodriguez (Miss Bala) and Ismael Cruz-Cordova struggle and fail in the recreation of Mexico’s 2011 Oscar nominee of the same name.

“Gloria” (Rodriquez) is a naïve, makeup artist, in the wrong place, wrong time, taken by the leader “Lino” (Cruz-Cordova) of a Mexican drug cartel; a malleable foil, her internship as a drug runner, is interrupted by the CIA; innocence is sacrificed as she is manipulated and manipulates both untoward worlds; lackluster, enervating sequences, leave viewers yearning for the intensity the scenario warrants. Forced to enter a “fixed” Miss Baja California pageant, Gloria, within minutes of victory, metamorphizes into a sexy, red-clad, gunslinger “Miss Bala” (bullet in Spanish); unfortunately, for all concerned, the film fired only blanks.