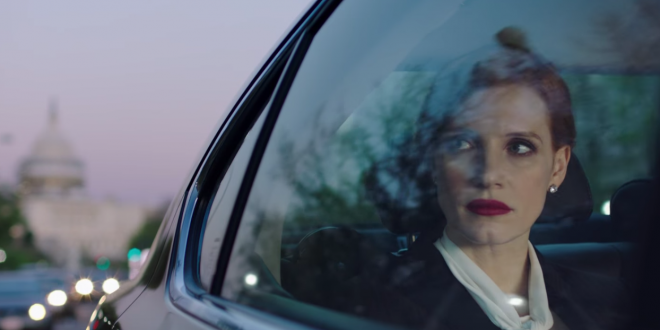 Jessica Chastain’s commanding and compelling performance as a cutthroat, ruthless, “take no prisoners” lobbyist is astoundingly admirable; with “Zorro’s” deftness, she lunges, parries with alarming precision, eliminating harbingers of irrelevancy with nary a scratch;  “Miss Sloane’s” mantra is to win at any cost, always being a move ahead, anticipating her adversary’s strategy, never revealing her trump card; a master, genius of manipulation, is Elizabeth Sloane.

Flawlessly groomed, brilliant, pill-popping, sleepless, she is addicted to champion, by whatever means, the cause she is paid to represent; in this scenario she leaves a lucrative position in a company headed by “George DuPont” (Sam Waterson) seeking women to rally against background checks for gun purchasers; she goes with the opposition, led by “Rodolfo Schmidt”  (Mark Strong) rightfully questioning the centuries old second amendment of the Constitution and its “the right to bear arms” principle.

Directed by John Madden “Miss Sloane” heightens the acting acuity of Guru Mbatha-Raw (“Belle”) as mathematician “Esme”, who suffers egregiously under Sloane’s lack of sensitivity and cold-hearted methods in achieving her goal. John Lithgow, as “Congressman Sperling”, repeatedly superior. But Chastain, “sharper than a serpent’s tooth” carries the film. In conclusion, recognizing the fictional Miss Sloane, will rise from the ashes, mimicking non-fictional Michael Milken and Martha Stewart and soar with the force of the mythological, legendary Phoenix.