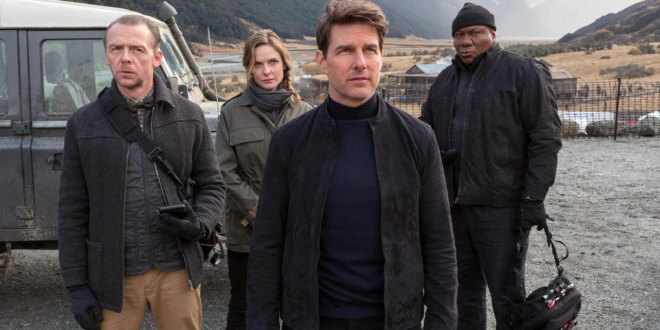 Poetic license is definitely insinuated when “Ethan Hunt’s” newest mission is delivered disguised in Homer’s “Odyssey”; hence the eponymous Hunt clones the Greek epic hero, “Odysseus/Ulysses”;  tested and passed with Olympian magnitude, Odysseus’ travails, within days, instead of years. For the sixth time, inimitable Tom Cruise, exuberantly swash-buckles, aerobically, defiantly flies through the film; at fifty-six, biconically performs his own stunts, and in this version surpasses and exponentially grows into an unforgettable, formidable, even sensitive Ethan Hunt.

The plot, including some recognizable mendicants (“Solomon Lane”/ Sean Harris), a smattering of new villains, one deliciously devilish (“August Walker”/ Henry Cavill), revolves around the quest for three cores of plutonium, they bounce from the hands of revolutionaries, to the altruistic; at times blurry to decipher between them. Forceful, feline femininity supplied by Michelle Monaghan, “Julia” and the ever imposing Rebecca Ferguson, “Ilsa”, Vanessa Kirby as the “White Widow”, a plutonium broker. Simon Pegg, “Benji”, and Ving Rhames, “Luther” add ubiquitous familiarity to the franchise.

“Mission: Impossible-Fallout” reminiscent of chess, a game of skill, heavily dependent on the sagacity, intelligence of the players; but Cruise is the King, never to be mated.  “Long live the King!”