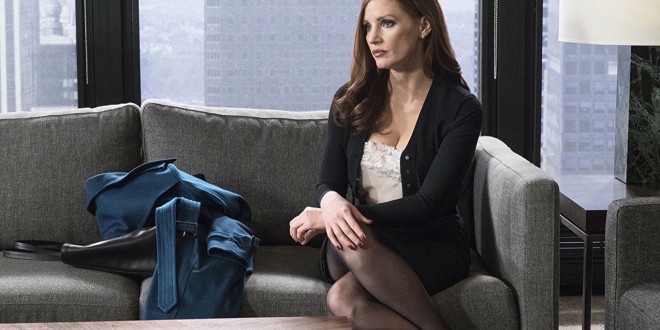 Aaron Sorkin’s feature directorial debut shines a beacon on Molly Dubin Bloom (1978-), the “Princess of Poker” and her revealing book “Molly’s Game” (2014); the film is smart, really smart, but you don’t have to be an intellectual to comprehend its nuances, just recognize that they’re there. I, for example, with the exception of “face” or “tell”, know bubkis about poker or any other card game; fellow college students, flunked classes: Bridge, the aphrodisiac to a degreeless future. No one does “smart” like Jessica Chastain, last year’s “Miss Sloan” aced her position as a brainiac of supreme caliber. In “Molly’s Game” she blazes as an ex-freestyle skier, Olympic hopes sabotaged by an errant stick; she and her father Larry Bloom (minimal but formidable Kevin Costner) have a contentious relationship, lending viability to her success in the male-monopolized game of poker. Her clandestine sport, with a $10,000 buy-in, included CEO’s, Hedge Fund gurus, movie stars (Leonardo DiCaprio, Toby McGuire, Ben Affleck, named in the book); it was the unnamed, mobsters, drug runners, Russian mafia, that the FBI tries (for immunity) to chisel from her.  It is two years after the game has ceased and she, penniless, is in desperate need of a lawyer.

Reluctantly, Charlie Jaffey accepts Molly as a client; Idris Elba, with sensational adroitness, matches Chastain’s oral acuity; Sorkin’s acerbic, witty script is mellowed by the smooth, honey-infused tongues of verbal sovereigns. More than the strategic, psychological moves of poker, it is Bloom’s and Jaffey’s vying for the better righteousness that captivate, compel and demand, ultimately solidifying our attention and comprehension.

2017-12-27
Peneflix Admin
Share !
Previous: THE GREATEST SHOWMAN
Next: ALL THE MONEY IN THE WORLD