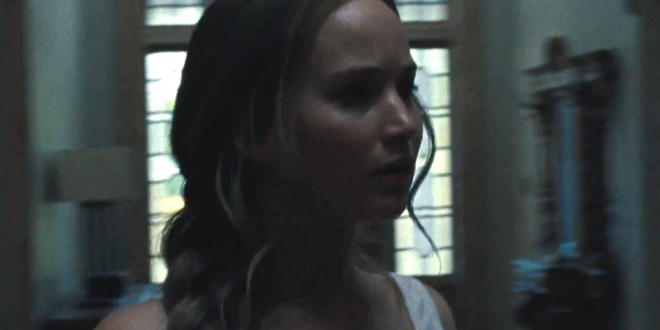 Writer/director Darren Aronofsky pushes the “envelope” into oblivion with this blistering, harrowing film, focusing on Christian/Biblical iconography, philosophy; a massive, bloody metaphor for inventiveness, inspiration, and “if at first you don’t succeed”, give it another go! From its commencement there is something awry in this May/December pairing, a chasm between the perpetually cooking, cleaning, painting housewife and her mate’s frenetic avoidance.

Jennifer Lawrence’s “mother” is an angelic, long-suffering, frustrated muse to her husband, “Him” (messianic portrayal by Javier Barden) a poet in profound creative crisis; living in a dilapidated, carnivorous home isolated from mankind. Enter a disparate couple (Michelle Pfeiffer and Ed Harris) gifting fodder to the poet’s withering facilities; representing destructiveness and enlightenment simultaneously; prototypes of Adam and Eve.

Apocalyptic cinematography (Matthew Libatique) hints at the supernatural scenario and its gory outcome. As “Mother” sinks into biblical overload, audiences are bludgeoned with references from Genesis, Ash Wednesday, Cain and Able, destruction of the First Temple, Second coming; most disturbing is the egregious physical, repugnant interpretation of Transubstantiation (Communion “Host” representing the  body and blood of Christ, consumed during Mass); reverential boundaries annihilated.

In conclusion, Aronofsky used his poetic license sensationally, audaciously shocking, stunning, at times sickening viewers, into recognizing that religion will continue to inform the populace; positive or negative effects, to be determined by the individual.