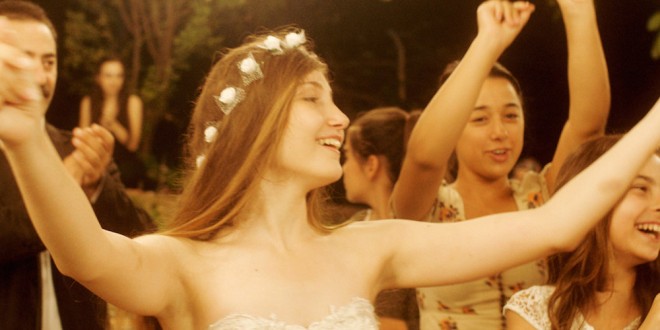 Watching this remarkable, perfect film by Director/Co-Writer Deniz Gamze Erguven, Richard Lovelace’s “stone walls do not a prison make, nor iron bars a cage” pungently informed my viewing experience; five ebullient sisters, running to the beach (Northern Turkey) with some of their male classmates, uniformed, they plunge fully-clothed into the water and engage in joyous, fun-loving, innocent high jinks; it is the last day of school and marks the end of their freedom. A shrewish neighbor reports their “untoward behavior” to their grandmother who has raised them, (along with a seedy uncle), since the death of their parents. They range in age from thirteen to seventeen; beautiful, with dark, Rapunzel- tresses.

Told from the perspective of “Lale” ( luminous, Gunes Sensoy) the youngest, brightest and toughest (“Mustang”) of the  girls; their resolve is challenged by the intransigence of their uncle and grandmother; windows, doors, access to the outer world is denied to them, they are imprisoned, steel bars stunt germinating creativity; ingenuity and their loving camaraderie lead to clever, inventive escapes, eventually stymied by a societal, preordained conception of women and their place in a restrictive male hierarchy.  Obsessed with their virginity, arranged marriages are sought for the older girls, resulting in some improbable but ludicrous displays of archaic behavior: medieval, pathological female victimization.

“Mustang”, never mentions religion, or an omnipresent force dictating behavior. The five young women desperately seek alternatives to their diminished choices; failure appears destined,  but Erguven with her intuitive and complete grasp of this restrictive culture, recognized the power of the indomitable spirit, like the mighty, stalwart mustang, refuses to be  subjugated, strangled;  survives, succeeds and soars.