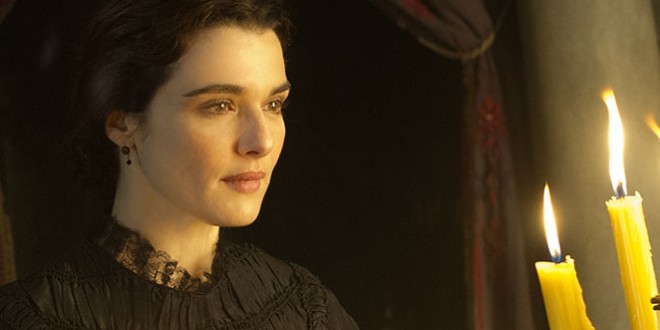 Intentionally ambiguous, Daphne du Maurier’s (1907-1989) novel, leaves readers musing, perplexed about the duplicitous widow, “Rachel”; portrayed marvelously by Olivia de Havilland in the 1952 film and equally exquisite, Rachel Weisz, in this year’s version. The sixty-five-year hiatus, with hindsight, enhances Rachel’s dilemma; the scenario evolves in the mid-1800’s on the Cornish coast of England; “Philip Ashley” (dashingly handsome Sam Claflin) is devastated by the death of his wealthy cousin “Ambrose” and suspects his wife has instigated his demise. His suspicions dissipate upon meeting Rachel and precipitously morph into obsession; passion leads him to gift Rachel the family gems and his inheritance upon his twenty-fifth birthday; his death would allow Rachel to be the mistress of her fate, freeing her from the suffocating confines of a male dominated sphere.

Weisz’s bold and brilliant performance captures the subtleties of female manipulation, coquetry; vacillating between innocence and worldliness, young Philip is defenseless against the onslaught of Rachel’s seductiveness; there is beauty, vulnerability and enigmatic magnetism in her depiction.

In 2017, many antiquated “norms” of the past have been shattered or redefined; older women marry men their junior; women are world leaders, corporate heads, control vast fortunes; women have doffed the shackles of an exclusive syndrome and evolved into a force of equality.

“My Cousin Rachel”, directed by Roger Michell, true to du Maurier’s mission, unveils the perils of an unprotected woman, the wiles she employs to make her “way in the world” and her reward/punishment for achieving them.