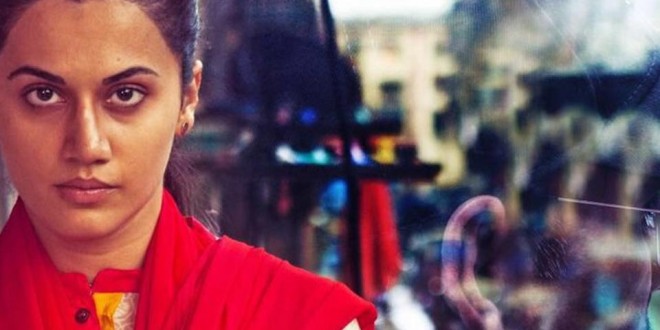 Shed any prejudices you might have against the Bollywood genre: “Naam Shabana” is as good as it gets in the outstandingly juicy “hell hath no fury like a woman scorned” or vandalized category; in league with two of my favorites, “Kahaani” (2012) and the superlative “Ek Hasina Thi” (2004), director Shivam Nair scores sensationally with this thriller, starring overwhelming talented Taapsee Pannu as “Shabana Khan”, a Muslim (this aspect should have been more explored) woman who single handedly strikes with special forces capabilities; she can mow down the mendacious in minutes, jump buildings Superman style; she’s a vigilante meting out justice where those in authority are too lazy or too bribed to take action.

Taapsee Pannu with her magnificent, makeup-less face and judo expertise, imbues the film with profound punitive authority; she partners periodically with Bollywood icon Akshay Kumar, as “Ajay”, both employed in a CIA style organization; a little fuzzy on their role in society, working “outside the box.” Seasoned actors Manoj Bajpayee, Prithviraj  Sukumaran (villainous, amoral arms dealer) and Anupam Kher contribute some, but insufficient stature, to the film.

“Naam Shabana” has all the ingredients, contributing to a concoction, guaranteed to titillate and satiate the cravings of a thrill-seeking viewer.