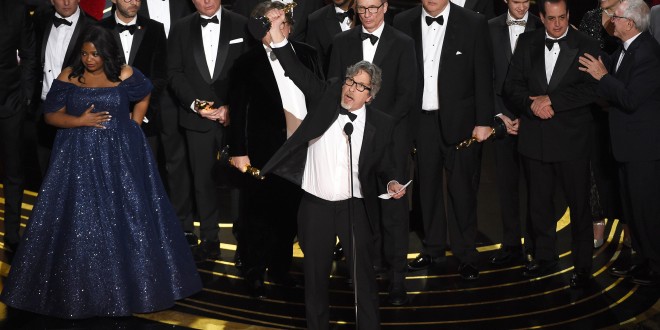 Peter Farrelly, center, and the cast and crew of "Green Book" accept the award for best picture at the Oscars on Sunday, Feb. 24, 2019, at the Dolby Theatre in Los Angeles. (Photo by Chris Pizzello/Invision/AP)

For the first time, because of the dynamics of this year’s competition, a consolation prize will be given to Brian B. for going all the way, until he was foiled by “The Green Book”; congratulations on your prescient choices.

For the most part, the evening was bland, benign and lacked the cohesiveness of a host; blessedly shorter than previous productions; more than the performers, it was their costuming that starred; pink was the prevalent hue: Angela Bassett, Sarah Paulson, Gemma Chan, Kacey Musgraves, Helen Mirren, Kiki Layne, all “pretty in pink.”

For a brief moment the Oscar nominees gifted audiences a hiatus from headlined sexual predators, egregious fraudulent culprits, Brexit and the Wall. Was it a night to remember? Hardly, but a luscious memento of the restorative faculties of a fine film.

Rapidly changing is the landscape of movies and how viewers interact with the genre; Netflix is creatively maneuvering its innovative shoulders; guaranteeing accessibility and other interesting, entertaining surprises for film devotees.

For your continued Subscribership, I am eternally appreciative. Thank you.