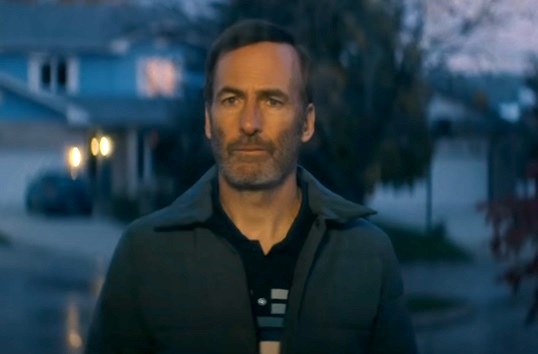 “I am Nobody! Who are you? Are you – Nobody – too?” Emily Dickinson’s pithy poem was resoundingly appropriate and applicable to “Hutch Mansel” a nine-to-five, redundantly predictable, encroaching on “Groundhog Day”, repetitiveness, average bloke, until his dark side is excavated by a home invasion; actor Bob Odenkirk’s physiognomy, demeanor, equanimity was crafted for the role; he melds, anonymously into surroundings fraught with malfeasance and/or innocence; he is Everyman, dismissed, overlooked, ignored, a façade taking years of scholarship to develop. When shattered, he doffs the “nice guy image” and becomes “a weapon of mass destruction”, a “John Wick” without slickness or wardrobe.

Director Ilya Naishuller’s successful concoction of action, chills and potency guarantees audiences hair-raising, breathless encounters but it is the pivotal, love to hate villain, that cements the plot and is the lifeline to a satisfying thriller; “Yulian” (magnetic, Aleksey Serebryakov) Russian Kingpin (from the myriad of Bond movies and beyond, you don’t mess with the Russians) kills with impunity; lyrically performs in his own Cabaret; deliciously evil, you yearn for his demise while simultaneously hoping he’ll avoid his deserved dispatch. Hutch and Yulian’s diversity, yin and yang confrontations are precisely, immaculately choreographed.

“How dreary to be Somebody”; “Nobody” skirts dreariness and morphs into “Somebody” worthy of “an admiring Bog”.