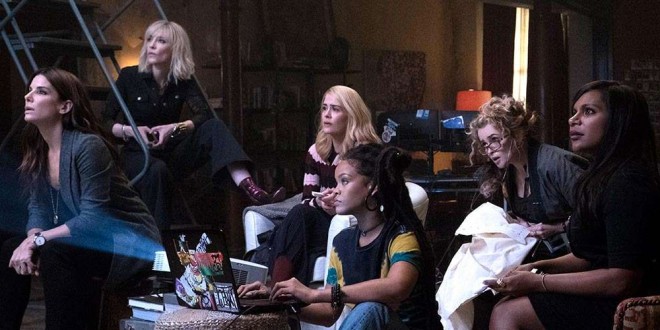 The “Ocean” heist films first graced the screen in 1960; the Rat Pack (Frank Sinatra, Dean Martin and Sammy Davis, Jr.) had the time of their lives as thieving renegades; “Ocean’s 11” through 13, 2001-2007 with hunky, handsome George Clooney as “Danny Ocean” the franchise desperately strove to cleverly surpass the preceding films; hence in the MeToo era, director Gary Ross passes the heisting trophy to women, allowing them the same creative inventiveness as their male forefathers, (in this case, brother); Sandra Bullock is “Debbi Ocean”, sister of the departed Danny, after five years as an inmate of the penal system has her own pilfering plan, a magnificent, monumental, orchestrated theft at the annual Metropolitan Museum Gala, held the first Monday in May.

Bullock is the reason to see this film; her steely maturity as an actor is at its pinnacle, her assuredness as a menacing force, focusing on a plan formulated in solitary confinement, suffering no fools, her intelligence gifts Debbi the power of conniving conviction; as nerve-wracking, tension-taunting as the plan is, there is never a doubt that success will elude her.

“Ocean’s 8” is fun, primarily because of the capable, seasoned cast, innovative, imaginative twists, but the genre has been over-exposed, surprising expectations have been copiously met; heart-palpating titillation, replaced by a satisfying, been-there ennui. Exiting, nostalgically longing for the electrifying thrills of “The Sting”, “A Fish Called Wanda”, “The Italian Job” even “Ocean’s 11”.