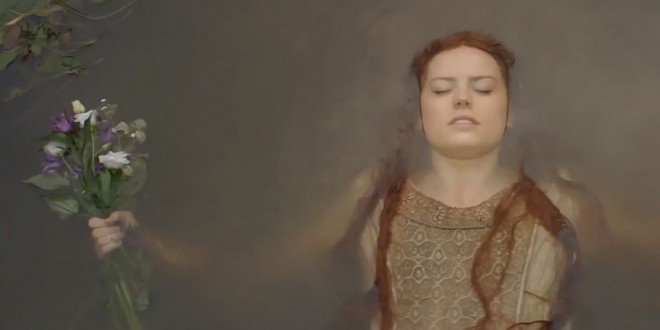 OPHELIA (ON DEMAND) & IN THEATERS

“Hamlet” is William Shakespeare’s (1564-1616) longest play and possibly, most well known; pungent with murder, madness, deceit, witchcraft and doomed romance, it has mastered time’s vanquishing test with inimitable longevity. Director Claire McCarthy and writer Semi Chellas have given the vastly ignored, drowned “Ophelia” a contemporary “Me-too” spin with a Cliff Note scenario, she is the only one of tangible interest in this ashen production. Daisy Ridley’s spunky performance as an intelligent, far from “mad”, scheming, lady-in-waiting, holds the doctored, shallow, indecisive film together; Naomi Watts struggles in a dual role as “Gertrude” (Hamlet’s mother) and “Mechtild” (shunned sister); Clive Owen, as a grossly jowled, mendacious murderer, “King Claudius” (Hamlet’s uncle) lacks credibility in his terminator depiction. “Hamlet” (George McKay) comes off as a petulant, spoiled, whiny teenager.

Pageantry and pathos, cloaked in glorious costuming, cannot compete with the original (“if it ain’t broke…”); questioning how the Bard would have reacted to this interpretation…..

my guess, “much ado about nothing”.