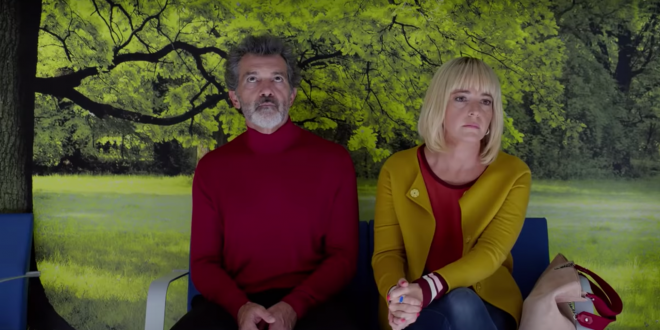 Director Pedro Almodovar (b.1949) excavates his inner core gifting audiences his most intimate, revelatory film to date: an aged, aching, physically and mentally scarred director, “Salvador Mallo” (played presciently by an Almodovar favorite, Antonio Banderas) comes to terms with his vulnerabilities, liabilities and mortality. Flashbacks of his childhood, informed by poverty, are sensitively, beautifully portrayed by Penelope Cruz (another Almodovar gem), as his mother “Jacinta” and enchanting Asier Flores, as young Salvador;  strengthened by ingenuity; their ambition flowers with the entrance of illiterate “Eduardo” (Cesar Vincente) who, paints and tiles their domicile in exchange for rudimentary writing and reading lessons; a stunning sequence between Eduardo and Salvador reveals the embryonic awakening, dawn of Salvador’s sexual orientation.

Initially a lethargic, uninspired Salvador is ignited by his iconic film, “Sabor” being rereleased after a thirty-two year hiatus; as the director, he is invited to the screening, along with its star “Alberto Crespo” (dazzling Asier Etxeandia), anchored by a feud as old as the film; their reconnection spurs Salvador’s heroin addiction; problematic, disturbing, seemingly staged manipulation; Almodovar’s voyeuristic approach to his own life was inflamed by unbridled honesty; flayed to harmonious perfection, an unencumbered skeleton, unabashedly witnessed by all.

“Pain and Glory” is an unveiling, dissection of, at times questionable, but pivotally profound and multifaceted life; “Addiction” a one man play written by Mallo, (shunned authorship) performed magnificently by Crespo; “pain sharpens an artist’s career” , glory, like a Phoenix, rises from its agony, culminating in ecstasy.