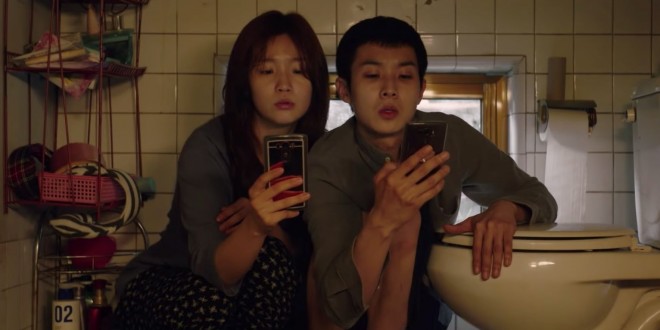 South Korean director Bong Joon-ho (“The Host”, “Snowpiercer”) won Cannes 2019’s, Palme d’or, for the astronomically mesmerizing “Parasite”; with biting, lacerating wit, psychological challenges, he orchestrates a scenario, in chess-like fashion, of a duel between the “haves” and those who long to be. Sublime acting by every character depicts a likeable group that earns respect from the inception. In dire financial straits the Kim clan clandestinely pollutes the privileged Park family; through tutoring, chauffeuring and house work, the Kims subjugate the naïve but well meaning Parks;  tantalizing sagacity, humor and intelligence slowly transform levity into horror.

Joon-ho’s subtle proselytizing between those “driven” and their “drivers” becomes murkier and murkier as the film reaches its disturbing finale; atmospherically profound, the Kims live in a dank, smelly basement, contrasted with the Parks airy, pristine Miesian splendor; the home itself is the parasitic breeding ground for subterfuge, catastrophe; tumultuous, plummeting rain, forecasts the ultimate schism between the two families.

Startling in its depth, “Parasite” is a study of the human condition rarely experienced; at its heart are people, intrinsically good, aided or hindered by their economic status; if the circumstances were reversed, the patronizing Parks might have proved just as cunning as the duplicitous Kims; leaving viewers with a questionable sadness, a longing to return to the scene and right the wrongs, realign the hierarchy; herein lies the grandeur of “Parasite.”